The Elasticity of Taxable Income and Income-shifting: What is "Real" and What is Not? 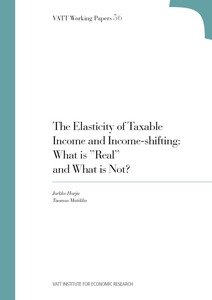 Previous literature shows that income taxation significantly affects the behavior of high-income earners and business owners. However, it is still unclear how much of the response is due to changes in effort and other real economic activity, and how much is caused by tax avoidance and tax evasion. This distinction is important because it affects the welfare implications and policy recommendations. In this paper we distinguish between real responses and tax-motivated income-shifting between tax bases. We show how the explicit inclusion of income-shifting affects the welfare analysis of income taxation. In our empirical example we find that income-shifting accounts for over two thirds of the overall elasticity of taxable dividend income among Finnish business owners. The large income-shifting response significantly decreases the marginal excess burden compared to the standard model in which the overall elasticity defines the welfare loss. However, in addition to income-shifting, we find that dividend taxation significantly affects the real behavior of owners.
11.9.2014 released WP was reissued 17.9.2015