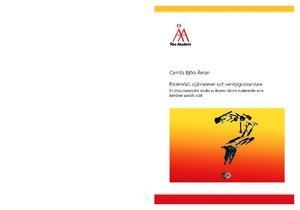 The groups within Finnish vocational upper secondary education and training (VET) are often heterogeneous with respect to the student's need for support in their studies. According to the national core curricula, Special Education Needs (SEN) students should in the first place, get their education in the same group as everyone else. This dissertation aims to clarify and create an understanding about how the ideals and intention of equality in education is constructed in communication among teachers in VET in the Swedish-speaking parts of Finland. Through this understanding it should be possible to highlight a potential which could ultimately contribute to a positive development of a more inclusive education within VET. The epistemological platform of the study is to be found within the post structuralist philosophy of language that is considered as subsumed in a social constructionist thinking. The data has been collected through focus group discussions in groups of 3–6 participants (teachers) in seven schools in Finnish-Swedish VET. The analyses are based on a discursive psychological analysis combined with an analysis based on Michel Foucault's concepts with an emphasis on the subject, government and power.
Four discourser where identified in the analysis of teachers' constructions of the educational assignment in relation to SEN students. The most dominant was discussing the educational assignment as a pragmatic project i.e. as a matter of transmission of knowledge. The discourse included both interpretative repertoires where the heterogeneous group was constructed as self-evident and possible to manage as well as a constructed as an impossible project. The educational assignment was also constructed as a holistic project, as part of a democratic project, and as a labor market project. Each discourse contains both including as well as excluding features in relation to SEN students. The development of an inclusive practice can and should therefore include elements from all of them. Three discourses were identified in the analysis concerning teachers' versions of SEN students: students with difficulties and problems; students who do not use or do not have ability and students who are irresponsible and lack the will to study. Within the various discourses and interpretative repertoires were both constructs when teachers described a concern and kindness in relation to the individual SEN student and constructions where teachers mainly expressed fears that other students in the group would be negatively affected by students in need of special support. Results from the third research question conclude the results from the two others, the analysis is done out of a government perspective. In the material use of different government techniques are identified: disciplinary power through direct reprimands; pastoral power by a desire of insight in order to promote the opportunities for consultation and the use of bio-power that primarily focuses on what is best for the population and whose tool racism results in a legitimation of the exclusion of SEN students.
The conclusion is that teachers in VET need to pay attention to inclusive and exclusive elements identified in various discourses.