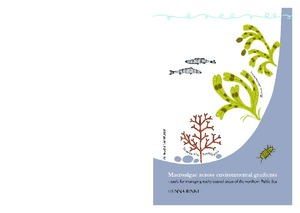 Macroalgae are the main primary producers of the temperate rocky shores providing a three-dimensional habitat, food and nursery grounds for many other species. During the past decades, the state of the coastal waters has deteriorated due to increasing human pressures, resulting in dramatic changes in coastal ecosystems, including macroalgal communities.
To reverse the deterioration of the European seas, the EU has adopted the Water Framework Directive (WFD) and the Marine Strategy Framework Directive (MSFD), aiming at improved status of the coastal waters and the marine environment. Further, the Habitats Directive (HD) calls for the protection of important habitats and species (many of which are marine) and the Maritime Spatial Planning Directive for sustainability in the use of resources and human activities at sea and by the coasts. To efficiently protect important marine habitats and communities, we need knowledge on their spatial distribution. Ecological knowledge is also needed to assess the status of the marine areas by involving biological indicators, as required by the WFD and the MSFD; knowledge on how biota changes with human-induced pressures is essential, but to reliably assess change, we need also to know how biotic communities vary over natural environmental gradients. This is especially important in sea areas such as the Baltic Sea, where the natural environmental gradients create substantial differences in biota between areas.
In this thesis, I studied the variation occurring in macroalgal communities across the environmental gradients of the northern Baltic Sea, including eutrophication induced changes. The aim was to produce knowledge to support the reliable use of macroalgae as indicators of ecological status of the marine areas and to test practical metrics that could potentially be used in status assessments. Further, the aim was to develop a methodology for mapping the HD Annex I habitat reefs, using the best available data on geology and bathymetry.
The results showed that the large-scale variation in the macroalgal community composition of the northern Baltic Sea is largely driven by salinity and exposure. Exposure is important also on smaller spatial scales, affecting species occurrence, community structure and depth penetration of algae. Consequently, the natural variability complicates the use of macroalgae as indicators of human-induced changes. Of the studied indicators, the number of perennial algal species, the perennial cover, the fraction of annual algae, and the lower limit of occurrence of red and brown perennial algae showed potential as usable indicators of ecological status. However, the cumulated cover of algae, commonly used as an indicator in the fully marine environments, showed low responses to eutrophication in the area. Although the mere occurrence of perennial algae did not show clear indicator potential, a distinct discrepancy in the occurrence of bladderwrack, Fucus vesiculosus, was found between two areas with differing eutrophication history, the Bothnian Sea and the Archipelago Sea. The absence of Fucus from many potential sites in the outer Archipelago Sea is likely due to its inability to recover from its disappearance from the area 30-40 years ago, highlighting the importance of past events in macroalgal occurrence.
The methodology presented for mapping the potential distribution and the ecological value of reefs showed, that relatively high accuracy in mapping can be achieved by combining existing available data, and the maps produced serve as valuable background information for more detailed surveys. Taken together, the results of the theses contribute significantly to the knowledge on macroalgal communities of the northern Baltic Sea that can be directly applied in various management contexts.