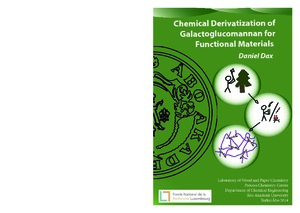 In the framework of the biorefinery concept researchers aspire to optimize the utilization of plant materials, such as agricultural wastes and wood. For most of the known processes, the first steps in the valorisation of biomass are the extraction and purification of the individual components. The obtained raw products by means of a controlled separation can consecutively be modified to result in biofuels or biogas for energy production, but also in value-added products such as additives and important building blocks for the chemical and material industries. Considerable efforts are undertaken in order to substitute the use of oil-based starting materials or at least minimize their processing for the production of everyday goods. Wood is one of the raw materials, which have gained large attention in the last decades and its composition has been studied in detail. Nowadays, the extraction of water-soluble hemicelluloses from wood is well known and so for example xylan can be obtained from hardwoods and O-acetyl galactoglucomannans (GGMs) from softwoods. The aim of this work was to develop water-soluble amphiphilic materials of GGM and to assess their potential use as additives. Furthermore, GGM was also applied as a crosslinker in the synthesis of functional hydrogels for the removal of toxic metals and metalloid ions from aqueous solutions. The distinguished products were obtained by several chemical approaches and analysed by nuclear magnetic resonance spectroscopy (NMR), Fourier transform infrared spectroscopy (FTIR), size exclusion chromatography (SEC), thermal gravimetric analysis (TGA), scanning electron microscope SEM, among others.
Bio-based surfactants were produced by applying GGM and different fatty acids as starting materials. On one hand, GGM-grafted-fatty acids were prepared by esterification and on the other hand, well-defined GGM-block-fatty acid derivatives were obtained by linking amino-functional fatty acids to the reducing end of GGM. The reaction conditions for the syntheses were optimized and the resultant amphiphilic GGM derivatives were evaluated concerning their ability to reduce the surface tension of water as surfactants. Furthermore, the block-structured derivatives were tested in respect to their applicability as additives for the surface modification of cellulosic materials. Besides the GGM surfactants with a bio-based hydrophilic and a bio-based hydrophobic part, also GGM block-structured derivatives with a synthetic hydrophobic tail, consisting of a polydimethylsiloxane chain, were prepared and assessed for the hydrophobization of surface of nanofibrillated cellulose films.
In order to generate GGM block-structured derivatives containing a synthetic tail with distinguished physical and chemical properties, as well as a tailored chain length, a controlled polymerization method was used. Therefore, firstly an initiator group was introduced at the reducing end of the GGM and consecutively single electron transfer-living radical polymerization (SET-LRP) was performed by applying three different monomers in individual reactions. For the accomplishment of the synthesis and the analysis of the products, challenges related to the solubility of the reactants had to be overcome. Overall, a synthesis route for the production of GGM block-copolymers bearing different synthetic polymer chains was developed and several derivatives were obtained.
Moreover, GGM with different molar masses were, after modification, used as a crosslinker in the synthesis of functional hydrogels. Hereby, a cationic monomer was used during the free radical polymerization and the resultant hydrogels were successfully tested for the removal of chromium and arsenic ions from aqueous solutions. The hydrogel synthesis was tailored and materials with distinguished physical properties, such as the swelling rate, were obtained after purification. The results generated in this work underline the potential of bio-based products and the urge to continue carrying out research in order to be able to use more green chemicals for the manufacturing of biorenewable and biodegradable daily products.