From genes to communities : stress tolerance in eelgrass (Zostera marina) 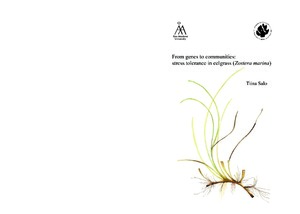 Salo, Tiina
Åbo Akademi University
This publication is copyrighted. You may download, display and print it for Your own personal use. Commercial use is prohibited.
Näytä kaikki kuvailutiedot
Julkaisun pysyvä osoite on
http://urn.fi/URN:NBN:fi-fe2014100745076

Shallow coastal areas are dynamic habitats that are affected by a variety of abiotic and biotic factors. In addition to the natural environmental stress, estuarine and coastal seagrass ecosystems are exposed to effects of climate change and other anthropogenic impacts. In this thesis the effect of different abiotic (shading stress, salinity and temperature) and biotic stressors (presence of co-occurring species) and different levels and combinations of stressors on the performance and survival of eelgrass (Zostera marina) was assessed. To investigate the importance of scale for stress responses, varying levels of biological organization (genotype, life stage, population and plant community) were studied in field and aquarium experiments.
Light limitation, decreased salinity and increased temperature affected eelgrass performance negatively in papers I, II and III, respectively. While co-occurring plant species had no notable effect on eelgrass in paper IV, the presence of eelgrass increased the biomass of Potamogeton perfoliatus. The findings in papers II and III confirmed that more extreme levels of salinity and temperature had stronger impacts on plant performance compared to intermediate levels, but intermediate levels also had more severe effects on plants when they were exposed to several stressors, as illustrated in paper II. Thus, multiple stressors had negative synergetic effects. The results in papers I, II and III indicate that future changes in light climate, salinity and temperature can have serious impacts on eelgrass performance and survival.
Stress responses were found to vary among genotypes, life stages and populations in papers I, II and III, respectively, emphasizing the importance of study scale. The results demonstrate that while stress in general affects seagrass productivity negatively, the severity of effects can vary substantially depending on the studied scale or level of biological organization. Eelgrass genotypes can differ in their stress and recovery processes, as observed in paper I. In paper II, eelgrass seedlings were less prone to abiotic stress compared to adult plants, but stress also decreased their survival considerably. This indicates that recruitment and re-colonization through seeds might be threatened in the future. Variation among population responses observed in paper III indicates that long-term local adaptation under differing selection pressures has caused divergence in salinity tolerance between Baltic eelgrass populations. This variability in stress tolerance observed in papers I and III suggests that some eelgrass genotypes and populations have a better capacity to adapt to changes and survive in a changing environment.
Multiple stressors and biological level-specific responses demonstrate the uncertainty in predicting eelgrass responses in a changing environment. As eelgrass populations may differ in their stress tolerance both within and across regions, conservation strategies at both local and regional scales are urgently needed in order to ensure the survival of these important ecosystems.