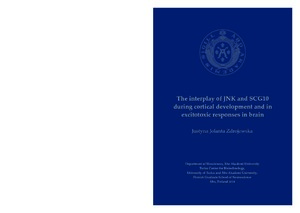 Initially identified as stress activated protein kinases (SAPKs), the c-Jun Nterminal kinases (JNKs) are currently accepted as potent regulators of various physiologically important cellular events. Named after their competence to phosphorylate transcription factor c-Jun in response to UVtreatment, JNKs play a key role in cell proliferation, cell death or cell migration. Interestingly, these functions are crucial for proper brain formation. The family consists of three JNK isoforms, JNK1, JNK2 and JNK3. Unlike brain specific JNK3 isoform, JNK1 and JNK2 are ubiquitously expressed. It is estimated that ten splice variants exist. However, the detailed cellular functions of these remain undetermined. In addition, physiological conditions keep the activities of JNK2 and JNK3 low in comparison with JNK1, whereas cellular stress raises the activity of these isoforms dramatically. Importantly, JNK1 activity is constitutively high in neurons, yet it does not stimulate cell death. This suggests a valuable role for JNK1 in brain development, but also as an important mediator of cell wellbeing.
The aim of this thesis was to characterize the functional relationship between JNK1 and SCG10. We found that SCG10 is a bona fide target for JNK. By employing differential centrifugation we showed that SCG10 co-localized with active JNK, MKK7 and JIP1 in a fraction containing endosomes and Golgi vesicles. Investigation of JNK knockout tissues using phosphospecific antibodies recognizing JNK-specific phosphorylation sites on SCG10 (Ser 62/Ser 73) showed that phosphorylation of endogenous SCG10 was dramatically decreased in Jnk1-/- brains. Moreover, we found that JNK and SCG10 co-express during early embryonic days in brain regions that undergo extensive neuronal migration. Our study revealed that selective inhibition of JNK in the cytoplasm significantly increased both the frequency of exit from the multipolar stage and radial migration rate. However, as a consequence, it led to ill-defined cellular organization. Furthermore, we found that multipolar exit and radial migration in Jnk1 deficient mice can be connected to changes in phosphorylation state of SCG10. Also, the expression of a pseudo-phosphorylated mutant form of SCG10, mimicking the JNK1- phopshorylated form, brings migration rate back to normal in Jnk1 knockout mouse embryos. Furthermore, we investigated the role of SCG10 and JNK in regulation of Golgi apparatus (GA) biogenesis and whether pathological JNK action could be discernible by its deregulation. We found that SCG10 maintains GA integrity as with the absence of SCG10 neurons present more compact fragmented GA structure, as shown by the knockdown approach. Interestingly, neurons isolated from Jnk1-/- mice show similar characteristics. Block of ER to GA is believed to be involved in development of Parkinson's disease. Hence, by using a pharmacological approach (Brefeldin A treatment), we showed that GA recovery is delayed upon removal of the drug in Jnk1-/- neurons to an extent similar to the shRNA SCG10-treated cells. Finally, we investigated the role of the JNK1-SCG10 duo in the maintenance of GA biogenesis following excitotoxic insult. Although the GA underwent fragmentation in response to NMDA treatment, we observed a substantial delay in GA disintegration in neurons lacking either JNK1 or SCG10.