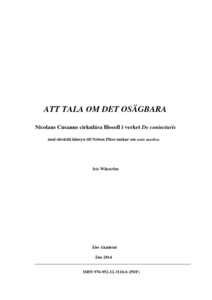 In my dissertation called Speaking of the unsayable: The circular philosophy of Nicholas of Cusa in his work De coniecturis, I presuppose an internal (conceptual) relation between the personal experience of God of Nicholas of Cusa (1401-64) in 1438 and, on the other hand, his philosophy. I hence try to describe the precise character of this relation. Referring to the Norwegian scholars Egil Wyller and Viggo Rossvær, I assume that there is a circularity in Cusanus’ philosophy which appears as self-references (= a sentence refers to itself: A is explained by B and B is explained by A). Wyller finds three phases in the thought of Cusanus (1. De docta ignorantia I-III, 2. De coniecturis I-II, 3. all subsequent works). Rossvær finds it impossible to presuppose certain phases, as the philosophy of Cusanus continuously proceeds and remains open to new ideas. As Cusanus however treats his experience of God far more consciously in his second work De coniecturis than in De docta ignorantia, I find it possible to distinguish between the earlier Cusanus (De docta ignorantia including his earlier works) and the later Cusanus (De coniecturis, about 1444, as well as the following works). Cusanus creates a philosophy of language in outline expressed in De coniecturis, in which he presents two concepts of necessity, i.e. absolute necessity and logical, or reasonable, necessity. These are interrelated in the sense that the mind, or the self, logically affirms the absolute, or unsayable, necessity, which shows itself in the mind and which the mind affirms conjecturally. The endeavour conceptually to understand absolute necessity implies intuitive (or intellectual) contemplation, or vision (investigatio symbolica), in which the four mental unities (the absolute, the intellectual, the rational and the sensuous) work together according to the rules described in De coniecturis. In De coniecturis Cusanus obviously turns from a negative concept of the unsayable to a paradigmatic, which implies that he looks for principles of speaking of the unsayable and presents the idea of a divine language (divinaliter). However, he leaves this idea behind after De coniecturis, although he continues to create new concepts of the unsayable and incomprehensible. The intellectual language of absolute seeing is expressed in the subjunctive, i.e. conditionally. In order to describe the unsayable, Cusanus uses tautologies, the primary one of which is a concept of God, i.e. non aliud est non aliud quam non aliud (the non-other is non-other than the nonother). Wyller considers this the crucial point of the philosophy of Cusanus (De non aliud), described by the latter as the definition of definitions, i.e. the absolute definition. However, this definition is empty regarding its content. It demonstrates that God surpasses the coincidence of opposites (coincidentia oppositorum) and that he is “superunsayable” (superineffabilis), i.e. he is beyond what can be conceived or said. Nothing hence prevents us from speaking of him, provided that he is described as unsayable (= the paradigmatic concept of the unsayable). Here the mode of seeing is decisive. Cusanus in this context (and especially in his later literary production) uses modalities which concern possibility and necessity. His aim is to conduct any willing reader ahead on the way of life (philosophia mentalis). In De coniecturis II he describes the notion of human self-consciousness as the basis of spiritual mutuality in accordance with the humanistic tradition of his time. I mainly oppose the negatively determined concept of Christian mysticism presented by the German philosopher Kurt Flasch and prefer the presentation of Burkhard Mojsisch of the translogical and conjectural use of language in De coniecturis. In particular, I take account of the Scandinavian research, basically that of Johannes Sløk, Birgit H. Helander, Egil Wyller and Viggo Rossvær, who all consider the personal experience of God described by Cusanus a tacit precondition of his philosophy.