Regulation of HSF2 and its function in mitosis 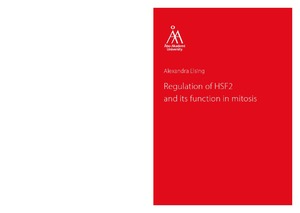 The cell is continuously subjected to various forms of external and intrinsic proteindamaging stresses, including hyperthermia, pathophysiological states, as well as cell differentiation and proliferation. Proteindamaging stresses result in denaturation and improper folding of proteins, leading to the formation of toxic aggregates that are detrimental for various pathological conditions, including Alzheimer’s and Huntington’s diseases. In order to maintain protein homeostasis, cells have developed different cytoprotective mechanisms, one of which is the evolutionary well-conserved heat shock response. The heat shock response results in the expression of heat shock proteins (Hsps), which act as molecular chaperones that bind to misfolded proteins, facilitate their refolding and prevent the formation of protein aggregates. Stress-induced expression of Hsps is mediated by a family of transcription factors, the heat shock factors, HSFs. Of the four HSFs found in vertebrates, HSF1-4, HSF1 is the major stress-responsive factor that is required for the induction of the heat shock response. HSF2 cannot alone induce Hsps, but modulates the heat shock response by forming heterotrimers with HSF1. HSFs are not only involved in the heat shock response, but they have also been found to have a function in development, neurodegenerative disorders, cancer, and longevity. Therefore, insight into how HSFs are regulated is important for the understanding of both normal physiological and disease processes.
The activity of HSF1 is mainly regulated by intricate post-translational modifications, whereas the activity of HSF2 is concentrationdependent. However, there is only limited understanding of how the abundance of HSF2 is regulated. This study describes two different means of how HSF2 levels are regulated. In the first study it was shown that microRNA miR-18, a member of the miR-17~92 cluster, directly regulates Hsf2 mRNA stability and thus protein levels. HSF2 has earlier been shown to play a profound role in the regulation of male germ cell maturation during the spermatogenesis. The effect on miR-18 on HSF2 was examined in vivo by transfecting intact seminiferous tubules, and it was found that inhibition of miR-18 resulted in increased HSF2 levels and modified expression of the HSF2 targets Ssty2 and Speer4a.
HSF2 has earlier been reported to modulate the heat shock response by forming heterotrimers with HSF1. In the second study, it was shown that HSF2 is cleared off the Hsp70 promoter and degraded by the ubiquitinproteasome pathway upon acute stress. By silencing components of the anaphase promoting complex/cyclosome (APC/C), including the co-activators Cdc20 and Cdh1, it was shown that APC/C mediates the heatinduced ubiquitylation of HSF2. Furthermore, down-regulation of Cdc20 was shown to alter the expression of heat shock-responsive genes. Next, we studied if APC/C-Cdc20, which controls cell cycle progression, also regulates HSF2 during the cell cycle. We found that both HSF2 mRNA and protein levels decreased during mitosis in several but not all human cell lines, indicating that HSF2 has a function in mitotic cells. Interestingly, although transcription is globally repressed during mitosis, mainly due to the displacement of RNA polymerase II and transcription factors, including HSF1, from the mitotic chromatin, HSF2 is capable of binding DNA during mitosis. Thus, during mitosis the heat shock response is impaired, leaving mitotic cells vulnerable to proteotoxic stress. However, in HSF2-deficient mitotic cells the Hsp70 promoter is accessible to both HSF1 and RNA polymerase II, allowing for stress-inducible Hsp expression to occur. As a consequence HSF2-deficient mitotic cells have a survival advantage upon acute heat stress. The results, presented in this thesis contribute to the understanding of the regulatory mechanisms of HSF2 and its function in the heat shock response in both interphase and mitotic cells.