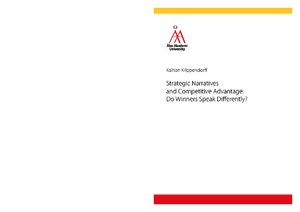 Concepts, models, or theories that end up shaping practices, whether those practices fall in the domains of science, technology, social movements, or business, always emerge through a change in language use. First, communities begin to talk differently, incorporating new vocabularies (Rorty, 1989), in their narratives. Whether the community’s new narratives respond to perceived anomalies or failures of the existing ones (Kuhn, 1962) or actually reveal inadequacies by addressing previously unrecognized practices (Fleck, 1979; Rorty, 1989) is less important here than the very phenomena that they introduce differences.
Then, if the new language proves to be useful, for example, because it helps the community solve a problem or create a possibility that existing narratives do not, the new narrative will begin circulating more broadly throughout the community. If other communities learn of the usefulness of these new narratives, and find them sufficiently persuasive, they may be compelled to test, modify, and eventually adopt them. Of primary importance is the idea that a new concept or narrative perceived as useful is more likely to be adopted.
We can expect that business concepts emerge through a similar pattern. Concepts such as “competitive advantage,” “disruption,” and the “resource based view,” now broadly known and accepted, were each at some point first introduced by a community. This community experimented with the concepts they introduced and found them useful. The concept “competitive advantage,” for example, helped researchers better explain why some firm’s outperformed others and helped practitioners more clearly understand what choices to make to improve the profit and growth prospects of their firms. The benefits of using these terms compelled other communities to consider, apply, and eventually adopt them as well. Were these terms not viewed as useful, they would not likely have been adopted.
This thesis attempts to observe and anticipate new business concepts that may be emerging. It does so by seeking to observe a community of business practitioners that are using different language and appear to be more successful than a similar community of practitioners that are have not yet begun using this different language as extensively. It argues that if the community that is adopting new types of narratives is perceived as being more successful, their success will attract the attention of other communities who may then seek to adopt the same narratives.
Specifically, this thesis compares the narratives used by a set of firms that are considered to be performing well (called Winners) with those of set of less-successful peers (called Losers). It does so with the aim of addressing two questions:
- How do the strategic narratives that circulate within “winning” companies and their leaders differ from those circulating within “losing” companies and their leaders?
- Given the answer to the first question: what new business strategy concepts are likely to emerge in the business community at large?
I expected to observe “winning” companies shifting their language, abandoning an older set of narratives for newer ones. However the analysis indicates a more interesting dynamic: “winning” companies adopt the same core narratives as their “losing” peers with equal frequency yet they go beyond these.
Both “winners” and “losers” seem to pursue economies of scale, customer captivity, best practices, and securing preferential access to resources with similar vigor. But “winners” seem to go further, applying three additional narratives in their pursuits of competitive advantage. They speak of coordinating what is uncoordinated, adopting what this thesis calls “exchanging the role of guest for that of host,” and “forcing a two-front battle” more frequently than their “loser” peers.
Since these “winning” companies are likely perceived as being more successful, the unique narratives they use are more likely to be emulated and adopted. Understanding in what ways winners speak differently, therefore, gives us a glimpse into the possible future evolution of business concepts.