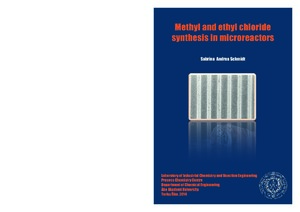 Methyl chloride is an important chemical intermediate with a variety of applications. It is produced today in large units and shipped to the endusers. Most of the derived products are harmless, as silicones, butyl rubber and methyl cellulose. However, methyl chloride is highly toxic and flammable. On-site production in the required quantities is desirable to reduce the risks involved in transportation and storage.
Ethyl chloride is a smaller-scale chemical intermediate that is mainly used in the production of cellulose derivatives. Thus, the combination of onsite production of methyl and ethyl chloride is attractive for the cellulose processing industry, e.g. current and future biorefineries. Both alkyl chlorides can be produced by hydrochlorination of the corresponding alcohol, ethanol or methanol.
Microreactors are attractive for the on-site production as the reactions are very fast and involve toxic chemicals. In microreactors, the diffusion limitations can be suppressed and the process safety can be improved. The modular setup of microreactors is flexible to adjust the production capacity as needed.
Although methyl and ethyl chloride are important chemical intermediates, the literature available on potential catalysts and reaction kinetics is limited. Thus the thesis includes an extensive catalyst screening and characterization, along with kinetic studies and engineering the hydrochlorination process in microreactors.
A range of zeolite and alumina based catalysts, neat and impregnated with ZnCl2, were screened for the methanol hydrochlorination. The influence of zinc loading, support, zinc precursor and pH was investigated. The catalysts were characterized with FTIR, TEM, XPS, nitrogen physisorption, XRD and EDX to identify the relationship between the catalyst characteristics and the activity and selectivity in the methyl chloride synthesis.
The acidic properties of the catalyst were strongly influenced upon the ZnCl2 modification. In both cases, alumina and zeolite supports, zinc reacted to a certain amount with specific surface sites, which resulted in a decrease of strong and medium Brønsted and Lewis acid sites and the formation of zinc-based weak Lewis acid sites. The latter are highly active and selective in methanol hydrochlorination. Along with the molecular zinc sites, bulk zinc species are present on the support material.
Zinc modified zeolite catalysts exhibited the highest activity also at low temperatures (ca 200 °C), however, showing deactivation with time-onstream. Zn/H-ZSM-5 zeolite catalysts had a higher stability than ZnCl2 modified H-Beta and they could be regenerated by burning the coke in air at 400 °C. Neat alumina and zinc modified alumina catalysts were active and selective at 300 °C and higher temperatures. However, zeolite catalysts can be suitable for methyl chloride synthesis at lower temperatures, i.e. 200 °C.
Neat γ-alumina was found to be the most stable catalyst when coated in a microreactor channel and it was thus used as the catalyst for systematic kinetic studies in the microreactor. A binder-free and reproducible catalyst coating technique was developed. The uniformity, thickness and stability of the coatings were extensively characterized by SEM, confocal microscopy and EDX analysis. A stable coating could be obtained by thermally pretreating the microreactor platelets and ball milling the alumina to obtain a small particle size. Slurry aging and slow drying improved the coating uniformity.
Methyl chloride synthesis from methanol and hydrochloric acid was performed in an alumina-coated microreactor. Conversions from 4% to 83% were achieved in the investigated temperature range of 280-340 °C. This demonstrated that the reaction is fast enough to be successfully performed in a microreactor system. The performance of the microreactor was compared with a tubular fixed bed reactor. The results obtained with both reactors were comparable, but the microreactor allows a rapid catalytic screening with low consumption of chemicals. As a complete conversion of methanol could not be reached in a single microreactor, a second microreactor was coupled in series. A maximum conversion of 97.6 % and a selectivity of 98.8 % were reached at 340°C, which is close to the calculated values at a thermodynamic equilibrium.
A kinetic model based on kinetic experiments and thermodynamic calculations was developed. The model was based on a Langmuir Hinshelwood-type mechanism and a plug flow model for the microreactor. The influence of the reactant adsorption on the catalyst surface was investigated by performing transient experiments and comparing different kinetic models. The obtained activation energy for methyl chloride was ca. two fold higher than the previously published, indicating diffusion limitations in the previous studies. A detailed modeling of the diffusion in the porous catalyst layer revealed that severe diffusion limitations occur starting from catalyst coating thicknesses of 50 μm. At a catalyst coating thickness of ca 15 μm as in the microreactor, the conditions of intrinsic kinetics prevail.
Ethanol hydrochlorination was performed successfully in the microreactor system. The reaction temperature was 240-340°C. An almost complete conversion of ethanol was achieved at 340°C. The product distribution was broader than for methanol hydrochlorination. Ethylene, diethyl ether and acetaldehyde were detected as by-products, ethylene being the most dominant by-product. A kinetic model including a thorough thermodynamic analysis was developed and the influence of adsorbed HCl on the reaction rate of ethanol dehydration reactions was demonstrated.
The separation of methyl chloride using condensers was investigated. The proposed microreactor-condenser concept enables the production of methyl chloride with a high purity of 99%.