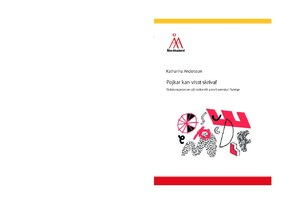 10-year old boys are writing texts in a National Test in the spring of 2009. The aim of this study is to increase knowledge in and understanding of boys’ writing skills through description, analysis and interpretation of the texts produced by the boys in the National Test in Swedish for junior level year three, taken in Sweden in 2009. The material consists of texts produced by boys and is focused on their ability to write. Through avoiding relating to texts produced by girls, it is possible to search, review, interpret and observe without simultaneously comparing the two genders. The aim of the test is to measure writing proficiency from a normative perspective, while I am investigating content, reception, awareness, and other aspects relevant when producing text. Genres are described through the instruction given in the test, which defines the work that takes place in the classroom and thereby my approach to the analysis. The latter is focused on finding patterns in the competence of the students rather than looking for flaws and limitations. When competence is searched for beyond the relationship to syllabi or the demands of the test in itself, the boys’ texts from the test provide a general foundation for investigating writing proficiency. Person, place and social group have been removed from the texts thereby avoiding aspects of social positioning. The texts are seen from the perspective of 10-year old boys who write texts in a National Test.
The theoretical basis as provided by Ivaničs (2004; 2012) offers models for theory on writing. A socio-cultural viewpoint (Smidt, 2009; Säljö, 2000) including literacy and a holistic view on writing is found throughout. By the use of abdicative logic (see 4.4) material and theory work in mutual cooperation.
The primary method hermeneutics (Gadamer 1997) and analytical closereading (Gustavsson, 1999) are used dependent on the requirements of the texts. The thesis builds its foundation through the analysis from theoretically diverse areas of science.
Central to the thesis is the result that boys who write texts in the National Test, are able to write in two separate genres without conversion or the creating hybrids between the two. Furthermore, the boys inhibit extensive knowledge about other types of texts, gained from TV, film, computers, books, games, and magazines even in such a culturally bound context as a test. Texts the boy has knowledge of through other situations can implicitly be inserted in his own text, or be explicitly written with a name of the main character, title, as well as other signifiers. These texts are written to express and describe what is required in the topic heading of the test. In addition other visible results of the boys’ ability to write well occur though the multitude of methods for analysis throughout the thesis which both search, and find writing competence in the texts written by the boys.