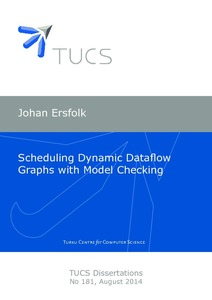 With the shift towards many-core computer architectures, dataflow programming has been proposed as one potential solution for producing software that scales to a varying number of processor cores. Programming for parallel architectures is considered difficult as the current popular programming languages are inherently sequential and introducing parallelism is typically up to the programmer. Dataflow, however, is inherently parallel, describing an application as a directed graph, where nodes represent calculations and edges represent a data dependency in form of a queue. These queues are the only allowed communication between the nodes, making the dependencies between the nodes explicit and thereby also the parallelism. Once a node have the su cient inputs available, the node can, independently of any other node, perform calculations, consume inputs, and produce outputs.
Data ow models have existed for several decades and have become popular for describing signal processing applications as the graph representation is a very natural representation within this eld. Digital lters are typically described with boxes and arrows also in textbooks. Data ow is also becoming more interesting in other domains, and in principle, any application working on an information stream ts the dataflow paradigm. Such applications are, among others, network protocols, cryptography, and multimedia applications. As an example, the MPEG group standardized a dataflow language called RVC-CAL to be use within reconfigurable video coding. Describing a video coder as a data ow network instead of with conventional programming languages, makes the coder more readable as it describes how the video dataflows through the different coding tools.
While dataflow provides an intuitive representation for many applications, it also introduces some new problems that need to be solved in order for data ow to be more widely used. The explicit parallelism of a dataflow program is descriptive and enables an improved utilization of available processing units, however, the independent nodes also implies that some kind of scheduling is required. The need for efficient scheduling becomes even more evident when the number of nodes is larger than the number of processing units and several nodes are running concurrently on one processor core. There exist several data ow models of computation, with different trade-offs between expressiveness and analyzability. These vary from rather restricted but statically schedulable, with minimal scheduling overhead, to dynamic where each ring requires a ring rule to evaluated. The model used in this work, namely RVC-CAL, is a very expressive language, and in the general case it requires dynamic scheduling, however, the strong encapsulation of dataflow nodes enables analysis and the scheduling overhead can be reduced by using quasi-static, or piecewise static, scheduling techniques.
The scheduling problem is concerned with nding the few scheduling decisions that must be run-time, while most decisions are pre-calculated. The result is then an, as small as possible, set of static schedules that are dynamically scheduled. To identify these dynamic decisions and to find the concrete schedules, this thesis shows how quasi-static scheduling can be represented as a model checking problem. This involves identifying the relevant information to generate a minimal but complete model to be used for model checking. The model must describe everything that may affect scheduling of the application while omitting everything else in order to avoid state space explosion. This kind of simplification is necessary to make the state space analysis feasible. For the model checker to nd the actual schedules, a set of scheduling strategies are de ned which are able to produce quasi-static schedulers for a wide range of applications.
The results of this work show that actor composition with quasi-static scheduling can be used to transform data ow programs to t many different computer architecture with different type and number of cores. This in turn, enables dataflow to provide a more platform independent representation as one application can be fitted to a specific processor architecture without changing the actual program representation. Instead, the program representation is in the context of design space exploration optimized by the development tools to fit the target platform. This work focuses on representing the dataflow scheduling problem as a model checking problem and is implemented as part of a compiler infrastructure. The thesis also presents experimental results as evidence of the usefulness of the approach.