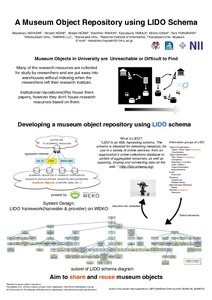 Many of the research resources are collected for study by researchers and are put away into warehouses without indexing when the researchers left their research institute. Moreover, in most of cases, these resources become inaccessible although they are cited in research papers. To overcome this situation, we have built a repository system for acquiring, organizing, preserving, and disseminating the research resources especially museum objects in research institutions such as universities and also have formed a research community. We attempt to implement Lightweight Information Describing Objects (LIDO) framework on a repository system for describing and sharing the museum objects. LIDO is an XML harvesting schema which designed by the Documentation Committee of the International Council of Museums (ICOM-CDOC) that intended for delivering metadata of museum objects. We also utilize WEKO , an open source repository software, as based the repository system.