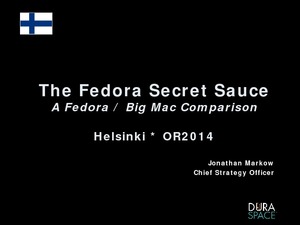 The Fedora Repository project has entered a period of rejuvenation over the past eighteen months. In a relatively short period of time, the latest iteration of the project--originally called “Fedora Futures” and now named “Fedora 4” to refer to the next sequential release—has made impressive leaps. After a period of analysis, the decision to re-architect the framework while maintaining an upgrade path for current users presented significant risks to the 12-year-old project and its community. To date, the project team has overcome the challenges it has encountered and has evolved the software in a direction that has been impressive. In doing so, the project has learned a number of lessons about the factors that contribute to project success. In this presentation, a panel of team members reflects on these lessons, and, in the interest of sharing its insights with others, describes the positive elements contributing to project health that some refer to as “The Fedora Secret Sauce”: