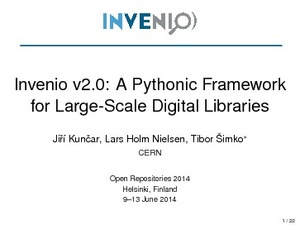 We describe the new major version of Invenio digital library software. The new version v2.0 comes after a major rewrite of the whole software platform. The main goal of the rewrite was to ease non-trivial platform customisation for large-scale repository installations. We present an overview of used technology, followed by description of the most notable user-facing novelties. The release of Invenio v2.0 can be considered as a major milestone in converting a fairly tightly integrated digital library platform towards a coherent framework of communicating, adaptable and independent Pythonic digital library components