Making the impact on research and society : a case study: crowdsourcing solutions developed for the linguistic research and citizen science 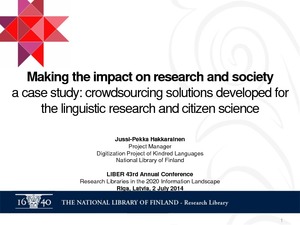 Can crowdsourcing solutions serve many masters? Can they be beneficial for both, for the layman or native speakers of minority languages on the one hand and serious linguistic research on the other? How did an infrastructure that was designed to support linguistics turn out to be a solution for raising awareness of native languages?

Since 2012 the National Library of Finland has been developing the Digitisation Project for Kindred Languages, in which the key objective is to support a culture of openness and interaction in linguistic research, but also to promote crowdsourcing as a tool for participation of the language community in research. In the course of the project, over 1,200 monographs and nearly 111,000 pages of newspapers in Finno-Ugric languages will be digitised and made available in the Fenno-Ugrica digital collection. This material was published in the Soviet Union in the 1920s and 1930s, and users have had only sporadic access to the material.

The publication of open-access and searchable materials from this period is a goldmine for researchers. Historians, social scientists and laymen with an interest in specific local publications can now find text materials pertinent to their studies. The linguistically-oriented population can also find writings to delight them: (1) lexical items specific to a given publication, and (2) orthographically-documented specifics of phonetics. In addition to the open access collection, we developed an open source code OCR editor that enables the editing of machine-encoded text for the benefit of linguistic research. This tool was necessary since these rare and peripheral prints often include already archaic characters, which are neglected by modern OCR software developers but belong to the historical context of kindred languages, and are thus an essential part of the linguistic heritage.

When modelling the OCR editor, it was essential to consider both the needs of researchers and the capabilities of lay citizens, and to have them participate in the planning and execution of the project from the very beginning. By implementing the feedback iteratively from both groups, it was possible to transform the requested changes as tools for research that not only supported the work of linguistics but also encouraged the citizen scientists to face the challenge and work with the crowdsourcing tools for the benefit of research.

This presentation will not only deal with the technical aspects, developments and achievements of the infrastructure but will highlight the way in which user groups, researchers and lay citizens were engaged in a process as an active and communicative group of users and how their contributions were made to mutual benefit.