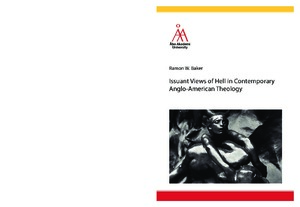 This problem of hell is a specific form of the problem of evil that can be expressed in terms of a set of putatively incompatible statements:
1. An omnipotent God could create a world in which all moral agents freely choose life with God.
2. An omnibenevolent God would not create a world with the foreknowledge that some (perhaps a significant proportion) of God’s creatures would end up in hell.
3. An omniscient God would know which people will end up in hell.
4. Some people will end up forever in hell.
Since the late twentieth century, a number of British and North American philosophical theologians, inspired by C.S. Lewis, have developed a new approach to answering the problem of hell. Very little work has been done to systematize this category of perspectives on the duration, quality, purpose and finality of hell. Indeed, there is no consensus among scholars as to what such an approach should be called. In this work, however, I call this perspective issuantism.
Starting from the works of a wide range of issuantist scholars, I distill what I believe to be the essence of issuantist perspectives on hell: hell is a state that does not result in universal salvation and is characterized by the insistance that both heaven and hell must issue from the love of God, an affirmation of libertarian human freedom and a rejection of retributive interpretations of hell. These sine qua non characteristics form what I have labeled basic issuantism. I proceed to show that basic issuantism by itself does not provide an adequate answer to the problem of hell. The issuantist scholars themselves, however, recognize this weakness and add a wide range of possible supplements to their basic issuantism. Some of these supplemented versions of issuantism succeed in presenting reasonable answers to the problem of hell.
One of the key reasons for the development of issuantist views of hell is a perceived failure on the part of conditionalists, universalists and defenders of hell as eternal conscious torment to give adequate answers to the problem of hell. It is my conclusion, however, that with the addition of some of the same supplements, versions of conditionalism and hell as eternal conscious torment can be advanced that succeed just as well in presenting answers to the problem of hell as those advanced by issuantists, thus rendering some of the issuantist critique of non-issuantist perspectives on hell unfounded.