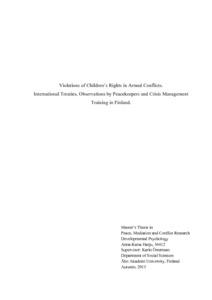 Harju, Anna-Kaisa
Åbo Akademi University
This publication is copyrighted. You may download, display and print it for Your own personal use. Commercial use is prohibited.
Näytä kaikki kuvailutiedot
Julkaisun pysyvä osoite on
http://urn.fi/URN:NBN:fi-fe2014051625888

Ninety-nine Finnish peacekeepers, who had been serving in 15 different operations around the world, participated in the study (8 women, 27-52 years old, m = 37.4, SD = 8.9; and 91 men, 21-69 years old, m = 41.4, SD = 10.2). Three military crisis management trainers from the Finnish Defence Forces International Centre also participated in the study. The data was collected with two webbased questionnaires. In addition two interviews were made with specialists of civilian crisis management in Finland. The study also provides an overview of international treaties concerning children’s rights in armed conflict. The results show that 48.7 % of dangers for children in conflicts reported by the peacekeepers were related to physical injury (e.g. landmines and traffic), and 27.4 % were related to social problems (e.g. poverty, child soldiers, and trafficking). 24.1 % of the peacekeepers had made observations of children’s rights violations either often or very often during peacekeeping operations. 49.6 % of the observations were related to social problems (e.g. child labour or being forced to beg), and 33.0 % were related to physical injury (e.g. assault). Frequency of observation of children’s rights violations was not associated with either sex or military degree of the peacekeepers; instead it was significantly correlated with the peacekeepers’ degree of knowledge of EU’s child protection guidelines. On the basis of the results, it is recommended that knowledge about children’s rights and protection should be included in the training of Finnish crisis management personnel to a much higher degree than at the present.