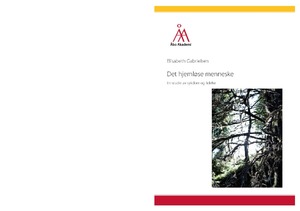 The overall aim of this study was to achieve a deeper understanding of the relationship between human suffering, disease and illness. The study is rooted in the health-care scientific research tradition as developed by Eriksson and her co-researchers at Åbo Akademi. The over-riding methodological initiative was Gadamer's hermeneutic philosophy. The main research question is: What is suffering of illness and disease? Sub-questions: Which characteristics occur when people experience being acutely ill (Article I)? What do the concepts acute, critical and chronic mean semantically (Article II)? In which way does the relation between the human being's experience of disease, illness and suffering, be manifested and understood? How does one characterize the relationship between the experience of contracting disease, illness and suffering (Article III)? How can the hermeneutical conversation contribute to the understanding of suffering caused by disease and illness (Article IV)?
The results of sub-study 1 showed that patients with acute myocardial infarction saw themselves as coping, competent, and autonomous individuals. They were used to exercising control, and it was difficult for them to relinquish control. The semantic analysis of acute in sub-study 2 revealed that the concept acute has had an unclear content in the Norwegian language over the past 65 years. Acute, as a concept, says something about the way a situation arises, but not much about what it is that arises. In sub-study, 3 the relation between disease, illness and suffering is discussed. The expression of illness and suffering as verbs can convey more clearly what it is that occurs with persons who experience disease, illness and suffering. The discussion in sub-study 4 focuses on trustworthiness in hermeneutical studies.