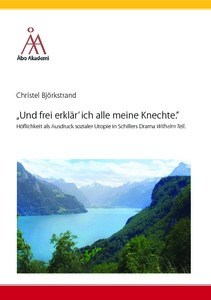 My dissertation is an interdisciplinary study of the relationship between the Swiss peasants and nobles in Friedrich Schiller’s play Wilhelm Tell (1804). Changes to this relationship are of particular interest. Communication in the play is examined via a micro-analysis based on Penelope Brown’s and Stephen C. Levinson’s theoretical framework Politeness: Some universals in language usage. (1978, 1987). Brown and Levinson distinguish between positivepoliteness and negative-politeness strategies and their distinction is useful for my argument, since they claim that the use of positive-politeness strategies reflects the speaker’s intention to minimize the distance between the interlocutors (Brown and Levinson 1987: 103). Negative-politeness strategies, by contrast, result in social distancing (Brown and Levinson 1987: 130). In accordance with Brown’s and Levinson’s theory, it can be argued that the distribution of positive-politeness and negative-politeness strategies reflects changes in the distance between the fictional interlocutors as representatives of their social classes in Wilhelm Tell.
The analysis of the communication in the play highlights that existing conflicts within the social groups are resolved and replaced with solidarity (cf. ‘Claim ’common ground’ and ‘Claim in-group membership with H’) before the peasants and noblemen appear on stage simultaneously in III, 3. In the scene in question, Geßler forces Tell to shoot the apple off his son’s head. Although both nobles and peasants are present, they do not communicate with each other. Thus, communication between the social classes occurs for the first time in IV, 2. This scene is crucial with regard to the changes in the relationship between the social classes in the play. The younger generation, with Rudenz as a representative of the nobility and Melchthal as a representative of the peasants, break with the prevailing conventions and initiate a new type of cooperation based on mutual helping and equality in the right and the duty to protect the country from the violent oppressors representing Habsburg (cf. ‘Convey that S and H are cooperators’, ‘Claim reflexivity’ and ‘Claim reciprocity’). The linguistic analysis reveals the crucial role of the Swiss nobility in the development of the social utopia, as well as the non-contribution of Wilhelm Tell. In fact, Tell never communicates with the Swiss noblemen.
The role of the nobility and the role of Wilhelm Tell are further investigated in a comparison between Schiller’s Wilhelm Tell and four of Schiller’s historical sources. These sources, which contain earlier, non-dramatic versions of the establishment of the Swiss Confederation, are the following: Kronica von der loblichen Eydtgnoschaft compiled by Petermann Etterlin (1507), Gemeiner loblicher Eydgnoschafft Stetten Landen vnd Völckeren Chronik wirdiger thaaten beschreybung (1548) written by Johann Stumpf, Chronicon Helveticum of Aegidius Tschudi (the publication of Iselin from 1734 and 1736) and Johannes von Müller’s Geschichten schweizerischer Eidgenossenschaft (1786). Thecomparison sheds light on the fact that both Tschudi and von Müller emphasize unity among the Swiss and cooperation in their attempt to defeat the enemy. However, Schiller has reinforced the role of the nobility in the cooperation. In addition, the comparison between Schiller’s play and the historical sources reveals profound differences with regard to the role of Wilhelm Tell. In all of Schiller’s sources, Tell is present at Rütli, whereas he is absent from Rütli in Schiller’s play. In the play in general, Tell is conspicuously separated from the other peasants.
Explanations of my linguistic results, which correspond to the above mentioned differences between the roles of the figures in Wilhelm Tell and the depictions in Schiller’s sources, are found by comparing the path of Schiller’s Swiss towards an egalitarian perspective with the kind of social evolution depicted by the German philosopher Johann Benjamin Erhard in his essay Über das Recht des Volks zu einer Revolution (1795). Aiming at considering Schiller’s social utopia within the larger cultural framework of the German response to the French Revolution, the comparison suggests that both authors depict the need for social change in terms of a change in social hierarchies (Erhard 1970: 95-96, cf. Foi 2005: 225). Erhard’s essay thus helps explain the political intention of Schiller’s play to keep the ideals of the French Revolution as crucial aims but profoundly change the means towards freedom and equality. In his attempt to claim the political resistance of the nobles and peasants as just, however, Schiller sacrificed the figure of Wilhelm Tell. Guilty of the murder of Geßler, Tell was no longer suitable for the righteous revolution imagined by Schiller (cf. Bloch 2008: 215 and Schulz 2005: 228). This explains Tell’s absence in the Rütli scene, his isolation in the plot, as well as his non-contribution to the social utopia.
Together, the linguistic analysis and contextualisation of Schiller’s play support my hypothesis that Wilhelm Tell describes a process of change in the relationship between peasants and nobles. The interdisciplinary approach to the topic proved to be fruitful for all areas of the research involved.