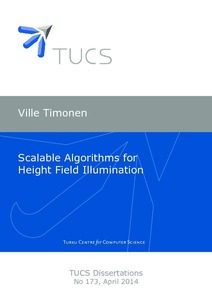 Global illumination algorithms are at the center of realistic image synthesis and account for non-trivial light transport and occlusion within scenes, such as indirect illumination, ambient occlusion, and environment lighting. Their computationally most difficult part is determining light source visibility at each visible scene point. Height fields, on the other hand, constitute an important special case of geometry and are mainly used to describe certain types of objects such as terrains and to map detailed geometry onto object surfaces. The geometry of an entire scene can also be approximated by treating the distance values of its camera projection as a screen-space height field.
In order to shadow height fields from environment lights a horizon map is usually used to occlude incident light. We reduce the per-receiver time complexity of generating the horizon map on N N height fields from O(N) of the previous work to O(1) by using an algorithm that incrementally traverses the height field and reuses the information already gathered along the path of traversal. We also propose an accurate method to integrate the incident light within the limits given by the horizon map. Indirect illumination in height fields requires information about which other points are visible to each height field point. We present an algorithm to determine this intervisibility in a time complexity that matches the space complexity of the produced visibility information, which is in contrast to previous methods which scale in the height field size. As a result the amount of computation is reduced by two orders of magnitude in common use cases.
Screen-space ambient obscurance methods approximate ambient obscurance from the depth bu er geometry and have been widely adopted by contemporary real-time applications. They work by sampling the screen-space geometry around each receiver point but have been previously limited to near- field effects because sampling a large radius quickly exceeds the render time budget. We present an algorithm that reduces the quadratic per-pixel complexity of previous methods to a linear complexity by line sweeping over the depth bu er and maintaining an internal representation of the processed geometry from which occluders can be efficiently queried. Another algorithm is presented to determine ambient obscurance from the entire depth bu er at each screen pixel. The algorithm scans the depth bu er in a quick pre-pass and locates important features in it, which are then used to evaluate the ambient obscurance integral accurately. We also propose an evaluation of the integral such that results within a few percent of the ray traced screen-space reference are obtained at real-time render times.