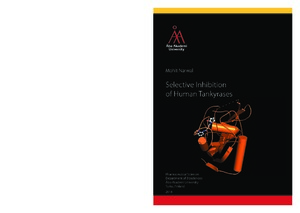 Tankyrases belong to the Diphtheria toxin-like ADP-ribosyltransferase (ARTD) enzyme superfamily, also known as poly(ADP-ribose) polymerases (PARPs). They catalyze a covalent post-translational modification reaction where they transfer ADP-ribose units from NAD+ to target proteins. Tankyrases are involved in many cellular processes and their roles in telomere homeostasis, Wnt signaling and in several diseases including cancers have made them interesting drug targets. In this thesis project, selective inhibition of human tankyrases was studied.
A homogeneous fluorescence-based assay was developed to screen the compound libraries. The assay is inexpensive, operationally easy, and performs well according to the statistical analysis. Assay suitability was confirmed by screening a natural product library. Flavone was identified as the most potent inhibitor in the library and this motivated us to screen a larger flavonoid library.
Results showed that flavones were indeed the best inhibitor of tankyrases among flavonoids. To further study the structure-activity relationship, a small library of flavones containing single substitution was screened and potency measurements allowed us to generate structure-activity relationship. Compounds containing substitutions at 4´-position were more potent in comparison to other substitutions, and importantly, hydrophobic groups improved isoenzyme selectivity as well as the potency. A flavone derivative containing a hydrophobic isopropyl group (compound 22), displayed 6 nM potency against TNKS1, excellent isoenzyme selectivity and Wnt signaling inhibition. Protein interactions with compounds were studied by solving complex crystal structures of the compounds with TNKS2 catalytic domain. A novel tankyrase inhibitor (IWR-1) was also crystallized in complex with TNKS2 catalytic domain. The crystal structure of TNKS2 in complex with IWR-1 showed that the compound binds to adenosine site and it was the first known ARTD inhibitor of this kind.
To date, there is no structural information available about the substrate binding with any of the ARTD family members; therefore NAD+ was soaked with TNKS2 catalytic domain crystals. However, analysis of crystal structure showed that NAD+ was hydrolyzed to nicotinamide. Also, a co-crystal structure of NAD+ mimic compound, EB-47, was solved which was used to deduce some insights about the substrate interactions with the enzyme.
Like EB-47, other ARTD1 inhibitors were also shown to inhibit tankyrases. It indicated that selectivity of the ARTD1 inhibitors should be considered as some of the effects in cells could come from tankyrase inhibition.
In conclusion, the study provides novel information on tankyrase inhibition and presents new insight into the selectivity and potency of compounds.