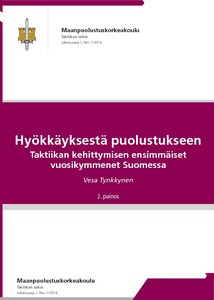 This study deals with the development of military tactics in Finland from independence to the early 1950s. The research is divided into three periods: the time before the Winter and Continuation wars and the time after the wars. Based mainly on archive sources each period and subject is dealt with in chronological order. The objective was to study the development features in Finnish tactics and the foreign impact on its development.

Before the Winter War, offence was regarded as the only course of action that could redress the balance of power in a possible war against the Soviet Union. Defence lacked the depth considered essential in European thinking because the troops were few and the heavily forested terrain prevented the deployment of automatic weapons in echelon. Delaying action was most clearly based on Finnish concepts.

Between the world wars, Finnish tactics was very pan-European. Mainly through German influence, the overall thinking followed the emphases of the international mainstream with many influences from other European countries, mainly from Sweden. However, the principles of the mainstream were adapted to suit the circumstances and position of Finland. The short Winter War against the Soviet Union proved that Finnish tactics was on the right track in its basic principles. During the Continuation War it was determined that tactical thinking could not rely solely on offence, but should be based to a greater extent on terms dictated by defensive tactics. During the static phase of the Continuation War, Finland did not receive adequate intelligence on the advances in the offensive capabilities of the Soviet Union. This was why defence tactics was influenced by German combat experiences against the Red Army. In repelling the massive Soviet attack, the use of deeper echelons was adopted as the basic principle in Finland.

After the war, the East - West confrontation put Finland in a totally new position. Because combat deep inside Finnish territory in future war seemed probable, Finland adopted a doctrine of territorial defence.

Army tactics expanded to more effectively include combat on the coast, in centers of population and in the northern areas of the country. The years after the wars had very little effect on Finnish tactics: development of defence tactics continued further toward defence in depth as a combat model. During the period of the present study, Finnish tactics developed from mainly offensive thinking to emphasizing defensive combat.