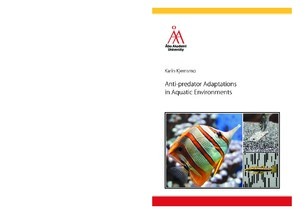 Kjernsmo, Karin
Åbo Akademi University
This publication is copyrighted. You may download, display and print it for Your own personal use. Commercial use is prohibited.
Näytä kaikki kuvailutiedot
Julkaisun pysyvä osoite on
http://urn.fi/URN:NBN:fi-fe2014030921393

Predation is an important selective force that has led to the
evolution of a variety of fascinating anti-predator adaptations, such
as many types of protective coloration and prey behaviours.
Because the evolution of life has begun in the aquatic environment
and many anti-predator adaptations are found already in relative
primitive taxa, it is likely that many of these adaptations evolved
initially in the aquatic environment. Yet, there has been
surprisingly little research on the mechanisms and function of antipredator
adaptations in aquatic systems. To understand the
function of anti-predator adaptations and natural selection
imposed on prey appearance and behaviour, I have investigated
how protective coloration can be used, either as such or together
with behavioural adaptations, to manipulate predator behaviour
and decrease predation risk. To this end I conducted a series of
behaviour ecological laboratory experiments in which I
manipulated the visual appearance of artificial backgrounds and
prey items.
In paper I of this thesis, I investigated background choice as an
anti-predator strategy, by observing the habitat choice of the least
killifish (Heterandria formosa) between pairs of artificial
backgrounds, both in the presence and absence of predation threat.
It has been suggested that prey could decrease their risk of being
detected by predators either by preferring backgrounds into which
they blend or by preferring visually complex backgrounds. The
least killifish preferred a background that matched their patterning
to a background that mismatched it, showing that they are able to
respond to cues of visual similarity between their colour pattern
and the surrounding environment. Interestingly however, in female
least killifish visual complexity of the background was a more
important cue for habitat safety and may override or act together
with background matching when searching for a safe habitat. It is
possible that in females, preference for visually complex
backgrounds is associated with lower opportunity costs than
preference for matching backgrounds would be. Generally, the
least killifish showed stronger preference while under predation
threat, indicating that their background choice behaviour is an antipredator
adaptation.
Many aquatic prey species have eyespots, which are colour
patterns that consist of roughly concentric rings and have received
their name because they for humans often resemble the vertebrate
eye. I investigated the anti-predator function of eyespots against
predation by fish in papers II, III and IV. Some eyespots have been
suggested to benefit prey by diverting the strikes of predators away
from vital parts of the prey body or towards a direction that
facilitates prey escape. Although proposed over a century ago, the
divertive effect of eyespots has proven to be difficult to show
experimentally. In papers II and III, I tested for divertive effect of
eyespots towards attacking fish by presenting artificial prey with
eyespots to laboratory reared three-spined sticklebacks
(Gasterosteus aculeatus). I found that eyespots strongly influenced
the behaviour of attacking sticklebacks and effectively drew their
strikes towards the eyespots. To further investigate this divertive
effect and whether the specific shape of eyespots is important for it,
I tested in paper III the response of fish also to other markings than
eyespots. I found that eyespots were generally more effective in
diverting the first strikes of attacking fish compared to other prey
markings. My findings suggest that the common occurrence of
eyespots in aquatic prey species can at least partly be explained by
the divertive effect of the eyespot shape, possibly together with the
relative simple developmental mechanisms underlying circular
colour patterns.
An eyebar is a stripe that runs through the eye, and this pattern
has been suggested to obscure the real eyes of the prey by visually
blending parts of the eyes and head of the prey and by creating
false edges. In paper III, I show that an eyebar effectively disrupts
an eyelike shape. This suggests that eyebars provide an effective
way to conceal the eyes and consequently obstruct detection and
recognition of prey. This experiment also demonstrates that
through concealment of the eyes, eyebars could be used to enhance
the divertive effect of eyespots, which can explain the common
occurrence of eyebars in many species of fish that have eyespots.
Larger eyespots have been shown to intimidate some terrestrial
predators, such as passerine birds, either because they resemble the
eyes of the predator’s own enemy or because highly salient features
may have an intimidating effect. In papers II and IV, I investigated
whether the occurrence of eyespots in some aquatic prey could be
explained by their intimidating effect predatory fish. In paper IV, I
also investigated the reason for the intimidating effect of eyelike
prey marks. In paper II, I found no clear intimidating effect of
eyespots, whereas in paper IV, using a different approach, I found
that sticklebacks hesitated to attack towards eyelike but not
towards non-eyelike marks. Importantly, paper IV therefore
presents the first rigorous evidence for the idea that eye mimicry,
and not merely conspicuousness, underlies the intimidating effect.
It also showed that the hesitation shown by fish towards eyelike
marks is partly an innate response that is reinforced by encounters
with predators.
Collectively, this thesis shows that prey colour pattern and the
visual appearance of the habitat influence the behaviour of fish.
The results demonstrate that protective coloration provides
numerous distinctive ways for aquatic prey to escape predation.
Thus, visual perception and behaviour of fish are important factors
shaping the appearance and behaviours of aquatic prey.