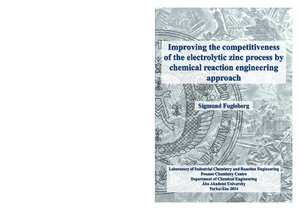 Fugleberg, Sigmund
Åbo Akademi University
This publication is copyrighted. You may download, display and print it for Your own personal use. Commercial use is prohibited.
Näytä kaikki kuvailutiedot
Julkaisun pysyvä osoite on
http://urn.fi/URN:NBN:fi-fe201402121462

This doctoral thesis describes the development work performed on the leachand purification sections in the electrolytic zinc plant in Kokkola to increase the efficiency in these two stages, and thus the competitiveness of the plant. Since metallic zinc is a typical bulk product, the improvement of the competitiveness of a plant was mostly an issue of decreasing unit costs.
The problems in the leaching were low recovery of valuable metals from raw materials, and that the available technology offered complicated and expensive processes to overcome this problem.
In the purification, the main problem was consumption of zinc powder - up to four to six times the stoichiometric demand. This reduced the capacity of the plant as this zinc is re-circulated through the electrolysis, which is the absolute bottleneck in a zinc plant. Low selectivity gave low-grade and low-value precipitates for further processing to metallic copper, cadmium, cobalt and nickel. Knowledge of the underlying chemistry was poor and process interruptions causing losses of zinc production were frequent.
Studies on leaching comprised the kinetics of ferrite leaching and jarosite precipitation, as well as the stability of jarosite in acidic plant solutions. A breakthrough came with the finding that jarosite could precipitate under conditions where ferrite would leach satisfactorily. Based on this discovery, a one-step process for the treatment of ferrite was developed. In the plant, the new process almost doubled the recovery of zinc from ferrite in the same equipment as the two-step jarosite process was operated in at that time. In a later expansion of the plant, investment savings were substantial compared to other technologies available.
In the solution purification, the key finding was that Co, Ni, and Cu formed specific arsenides in the “hot arsenic zinc dust” step. This was utilized for the development of a three-step purification stage based on fluidized bed technology in all three steps, i.e. removal of Cu, Co and Cd. Both precipitation rates and selectivity increased, which strongly decreased the zinc powder consumption through a substantially suppressed hydrogen gas evolution. Better selectivity improved the value of the precipitates: cadmium, which caused environmental problems in the copper smelter, was reduced from 1-3% reported normally down to 0.05 %, and a cobalt cake with 15 % Co was easily produced in laboratory experiments in the cobalt removal. The zinc powder consumption in the plant for a solution containing Cu, Co, Ni and Cd (1000, 25, 30 and 350 mg/l, respectively), was around 1.8 g/l; i.e. only 1.4 times the stoichiometric demand – or, about 60% saving in powder consumption.
Two processes for direct leaching of the concentrate under atmospheric conditions were developed, one of which was implemented in the Kokkola zinc plant. Compared to the existing pressure leach technology, savings were obtained mostly in investment.
The scientific basis for the most important processes and process improvements is given in the doctoral thesis. This includes mathematical modeling and thermodynamic evaluation of experimental results and hypotheses developed.
Five of the processes developed in this research and development program were implemented in the plant and are still operated. Even though these processes were developed with the focus on the plant in Kokkola, they can also be implemented at low cost in most of the zinc plants globally, and have thus a great significance in the development of the electrolytic zinc process in general.