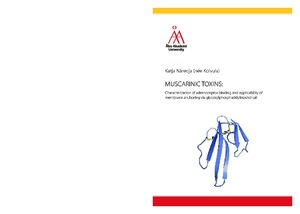 Adrenoceptors (ARs), G-protein coupled receptors (GPCRs) at the plasma membrane, respond to endogenous catecholamines noradrenaline and adrenaline. These receptors mediate several important physiological functions being especially important in the cardiovascular system and in the regulation of smooth muscle contraction. Impairments in the function of these receptors can thus lead to severe diseases and disorders such as to cardiovascular diseases and benign prostatic hyperplasia. The Eastern green mamba (Dendroaspis angusticeps) venom has been shown to contain toxins that can antagonize the functions of GPCRs. The most well-known are muscarinic toxins (MTs) targeting muscarinic acetylcholine receptors (mAChRs) with high affinity and selectivity. However, some reports have indicated that these toxins might also act on the α1- and α2-ARs which can be divided into various subtypes; the α1-ARs to α1A-, α1B- and α1D-ARs and α2-ARs to α2A-, α2B- and α2C-ARs.
In this thesis, the interaction of four common MTs (MT1, MT3, MT7 and MTα) with the adrenoceptors was characterized. It was also evaluated whether these toxins could be anchored to the plasma membrane via glycosylphosphatidylinositol (GPI) tail. Results of this thesis reveal that muscarinic toxins are targeting several α-adrenoceptor subtypes in addition to their previously identified target receptors, mAChRs. MTα was found to interact with high affinity and selectivity with the α2B-AR whereas MT7 confirmed its selectivity for the M1 mAChR. Unlike MTα and MT7, MT1 and MT3 have a broad range of target receptors among the α-ARs. All the MTs characterized were found to behave as non-competitive antagonists of receptor action. The interaction between MTα and the α2B-AR was studied more closely and it was observed that the second extracellular loop of the receptor functions as a structural entity enabling toxin binding. The binding of MTα to the α2B-AR appears to be rather complex and probably involves dimerized receptor. Anchoring MTs to the plasma membrane did not interfere with their pharmacological profile; all the GPI-anchored toxins created retained their ability to block their target receptors.
This thesis shows that muscarinic toxins are able to target several subtypes of α-ARs and mAChRs. These toxins offer thus a possibility to create new subtype specific ligands for the α-AR subtypes. Membrane anchored MTs on the other hand could be used to block α-AR and mAChR actions in disease conditions such as in hypertension and in gastrointestinal and urinary bladder disorders in a cell-specific manner and to study the physiological functions of ARs and mAChRs in vivo in model organisms.