Of milquetoasts and daredevils : personalities in female eiders 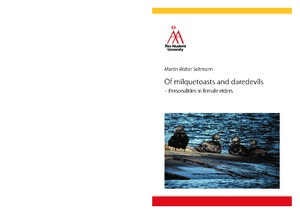 Traditionally biologists have often considered individual differences in behaviour or physiology as a nuisance when investigating a population of individuals. These differences have mostly been dismissed as measurement errors or as non-adaptive variation around an adaptive population mean. Recent research, however, challenges this view. While long acknowledged in human personality studies, the importance of individual variation has recently entered into ecological and evolutionary studies in the form of animal personality. The concept of animal personality focuses on consistent differences within and between individuals in behavioural and physiological traits across time and contexts and its ecological and evolutionary consequences. Nevertheless, a satisfactory explanation for the existence of personality is still lacking. Although there is a growing number of explanatory theoretical models, there is still a lack of empirical studies on wild populations showing how traditional life-history tradeoffs can explain the maintenance of variation in personality traits.
In this thesis, I first investigate the validity of variation in allostatic load or baseline corticosterone (CORT) concentrations as a measure for differences in individual quality. The association between CORT and quality has recently been summarised under the “CORT-fitness hypothesis”, which states that a general negative relationship between baseline CORT and fitness exists. I then continue to apply the concept of animal personality to depict how the life-history trade-off between survival and fecundity is mediated in incubating female eiders (Somateria mollissima), thereby maintaining variation in behaviour and physiology. To this end, I investigated breeding female eiders from a wild population that breeds in the archipelago around Tvärminne Zoological Station, SW Finland. The field data used was collected from 2008 to 2012. The overall aim of the thesis was to show how differences in personality and stress responsiveness are linked to a life-history context. In the four chapters I examine how the life-history trade-off between survival and fecundity could be resolved depending on consistent individual differences in escape behaviour, stress physiology, individual quality and nest-site selection.
First, I corroborated the validity of the “CORT-fitness hypothesis”, by showing that reproductive success is generally negatively correlated with serum and faecal baseline CORT levels. The association between individual quality and baseline CORT is, however, context dependent. Poor body condition was associated with elevated serum baseline CORT only in older breeders, while a larger reproductive investment (clutch mass) was associated with elevated serum baseline CORT among females breeding late in the season. Interestingly, good body condition was associated with elevated faecal baseline CORT levels in late breeders. High faecal baseline CORT levels were positively related to high baseline body temperature, and breeders in poor condition showed an elevated baseline body temperature, but only on open islands. The relationship between stress physiology and individual quality is modulated by breeding experience and breeding phenology. Consequently, the context dependency highlights that this relationship has to be interpreted cautiously.
Additionally, I verified if stress responsiveness is related to risk-taking behaviour. Females who took fewer risks (longer flight initiation distance) showed a stronger stress response (measured as an increase in CORT concentration after capture and handling of the bird). However, this association was modulated by breeding experience and body condition, with young breeders and those in poor body condition showing the strongest relationship between risktaking and stress responsiveness. Shy females (longer flight initiation distance) also incubated their clutch for a shorter time. Additionally, I demonstrated that stress responsiveness and predation risk interact with maternal investment and reproductive success. Under high risk of predation, females that incubated a larger clutch showed a stronger stress response. Surprisingly, these females also exhibited higher reproductive success than females with a weaker stress response. Again, these context dependent results suggest that the relationship between stress responsiveness and risk-taking behaviour should not be studied in isolation from individual quality and that stress responsiveness may show adaptive plasticity when individuals are exposed to different predation regimes.
Finally, female risk-taking behaviour and stress coping styles were also related to nest-site choice. Less stress responsive females more frequently occupied nests with greater coverage that were farther away from the shoreline. Females nesting in nests with medium cover and farther from the shoreline had higher reproductive success. These results suggest that different personality types are distributed non-randomly in space.
In this thesis I was able to demonstrate that personalities and stress coping strategies are persistent individual characteristics, which express measurable effects on fitness. This suggests that those traits are exposed to natural selection and thereby can evolve. Furthermore, individual variation in personality and stress coping strategy is linked to the alternative ways in which animals resolve essential life-history trade-offs.