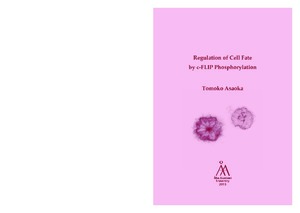 Programmed cell death is an important physiological cellular process that maintains homeostasis and protects multicellular organisms from diseases. Apoptosis is the principal mode of cell death, which eliminates unwanted cells and an enormous effort has been made to understand the molecular mechanisms of the signaling pathway and its regulatory systems. Irregular apoptosis often has life-threatening consequences to humans, including cancer, autoimmune diseases and degenerative diseases. In cancer for example, cell death is an attractive target to eradicate uncontrollably proliferating cells that have disregard pro-apoptotic signaling. Targeted therapeutic approaches are not as effective as once expected, since now we know that the cell death pathways are not sole entities in cells, but are highly associated with various cellular processes. Proteins that regulate apoptosis can also control non-apoptotic signaling pathways. For example, c-FLIP is a protein that can either inhibit or promote caspase-8 activation, which is required to induce apoptosis. Not only has c-FLIP opposing effects on initiating apoptosis, but it also regulates various pro-survival signaling pathways in the cell. It is well known that protein expression level is a determinant of how c-FLIP can regulate different signaling pathways, but other regulatory mechanisms potentially affecting the role of c-FLIP are less well understood. This work addresses novel insights into the mechanisms of c-FLIP post-translational modifications and their functional consequences. We have identified that phosphorylation is an important inception for subcellular localization of c-FLIP, thereby dictating which apoptotic and non-apoptotic signaling pathways c-FLIP could regulate to promote cell survival. Furthermore, we have constructed mathematical models to unite independent studies to establish more systematic c-FLIP signaling pathways to understand the dynamics of extrinsically-induced apoptosis.