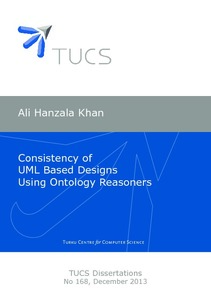 Software plays an important role in our society and economy. Software development is an intricate process, and it comprises many different tasks: gathering requirements, designing new solutions that fulfill these requirements, as well as implementing these designs using a programming language into a working system. As a consequence, the development of high quality software is a core problem in software engineering. This thesis focuses on the validation of software designs.
The issue of the analysis of designs is of great importance, since errors originating from designs may appear in the final system. It is considered economical to rectify the problems as early in the software development process as possible. Practitioners often create and visualize designs using modeling languages, one of the more popular being the Uni ed Modeling Language (UML). The analysis of the designs can be done manually, but in case of large systems, the need of mechanisms that automatically analyze these designs arises.
In this thesis, we propose an automatic approach to analyze UML based designs using logic reasoners. This approach firstly proposes the translations of the UML based designs into a language understandable by reasoners in the form of logic facts, and secondly shows how to use the logic reasoners to infer the logical consequences of these logic facts. We have implemented the proposed translations in the form of a tool that can be used with any standard compliant UML modeling tool. Moreover, we authenticate the proposed approach by automatically validating hundreds of UML based designs that consist of thousands of model elements available in an online model repository. The proposed approach is limited in scope, but is fully automatic and does not require any expertise of logic languages from the user. We exemplify the proposed approach with two applications, which include the validation of domain specific languages and the validation of web service interfaces.