Indoor air quality at a waste incineration plant in Finland 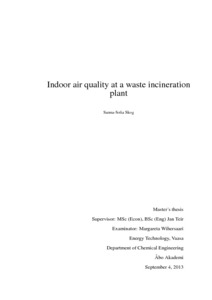 Skog, Sanna-Sofia
Åbo Akademi University
This publication is copyrighted. You may download, display and print it for Your own personal use. Commercial use is prohibited.
Näytä kaikki kuvailutiedot
Julkaisun pysyvä osoite on
https://urn.fi/URN:NBN:fi-fe201311077018

Waste has been incinerated for energy utilization for more than a hundred years, but the harmful emissions emitted from the incineration plants did not begin to cause concern until the 1980s. Many plants were shutdown and the waste incineration plant in Kyläsaari Helsinki was one of them. In later years, new landfill regulations have increased the interest in waste incineration. During the last year, four new plants were taken into operation in Finland, Westenergy in Vaasa among them.
The presence of dust has been observed indoors at Westenergy waste incineration plant. Dust is defined as particles with a diameter above 10 μm, while fine particles have a diameter smaller than 2.5 μm, ultrafine under 0.1 μm and nanoparticles under 0.05 μm. In recent years, the focus of particle health research has been changed to investigate smaller particles. Ultrafine particles have been found to be more detrimental to health than larger particles. Limit values regulating the concentrations of ultrafine particles have not been determined yet.
The objective of this thesis was to investigate dust and particles present inside the Westenergy waste incineration facility. The task was to investigate the potential pollutant sources and to give recommendations of how to minimize the presence of dust and particles in the power plant. The total particle number concentrations and size distributions where measured at 15 points inside the plant with an Engine Exhaust Particle Sizer (EEPS) Spectrometer. The measured particles were mainly in the ultrafine size range. Dust was only visually investigated, since the main purpose was to follow the dust accumulation. The measurement points inside the incineration plant were chosen according to investigate exposure to visitors and workers. At some points probable leakage of emissions were investigated. The measurements were carried out during approximately one month in March–April 2013.
The results of the measurements showed that elevated levels of dust and particles are present in the indoor air at the waste incineration plant. The cleanest air was found in the control room, warehouse and office. The most polluted air was near the sources that were investigated due to possible leakage and in the bottom ash hall. However, the concentrations were near measured background concentrations in European cities and no leakage could be detected. The high concentrations were assumed to be a result of a lot of dust and particles present on surfaces that had not been cleaned in a while. The main source of the dust and particles present inside the waste incineration plant was thought to be particles and dust from the outside air. Other activities in the area around the waste incineration facility are ground work activities, stone crushing and traffic, which probably are sources of particle formation. Filtration of the outside air prior entering the facility would probably save personnel and visitors from nuisance and save in cleaning and maintenance costs.