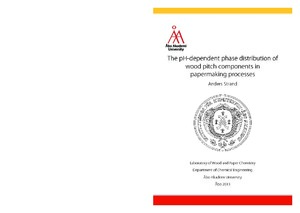 Wood contains only a very small amount of lipophilic extractives, commonly known as wood pitch. The pitch is known to cause severe problems in papermaking processes. The amount of pitch in process waters can be decreased by seasoning of the raw material prior to pulping, pulp washing, removal of pitch by flotation, adsorption of pitch onto various mineral surfaces, and retention of pitch to the fibre material by cationic polymers. The aim of this study was to determine the influence of pH on some of the methods used for pitch control.
Experiments were performed using laboratory-made wood pitch emulsions with varying pH, salt concentration, hemicellulose concentration and pitch composition. These emulsions were used to study the phase distribution of resin and fatty acids, the colloidal stability of pitch with and without steric stabilisation by galactoglucomannans, and the interactions between wood pitch and mineral particles. Purification of unbleached and peroxidebleached mill process water was performed by froth flotation in combination with a foaming agent.
The distribution of resin and fatty acids (RFAs) between colloidal pitch droplets and the water phase was very dependent on pH. At pH 3, almost all of the RFAs were attached to the pitch droplets, while increasing the pH led to increasing concentration of dissolved RFAs in the water phase. The presence of salt shifted the release of RFAs towards higher pH, while lower ratio of neutral pitch in the emulsion resulted in release of RFAs at lower pH. It was also seen that the dissolution and adsorption of RFAs at sudden pHchanges takes place very quickly. Colloidal pitch was more stable against electrolyte-induced aggregation at higher pH, due to its higher anionic charge. The concentration of cationic polymers needed to aggregate colloidal pitch also increased with increasing pH. The surface characteristics of solid particles, such as amount of charged groups, were very important for understanding their interactions with colloidal wood pitch. Water-soluble galactoglucomannans stabilised the colloidal pitch sterically against aggregation, but could not completely prevent interactions between wood pitch and hydrophilic particles. Froth flotation of unbleached and peroxidebleached process water showed that the pitch could be removed more effectively and selectively at low pH, compared to at neutral pH. The pitch was removed more effectively, using lower concentrations of foaming agent, from peroxide-bleached water than from unbleached water.
The results show that pH has a major impact on various pulping and papermaking processes. It determines the anionic charge of the colloidal pitch and the solubility of certain pitch components. Because of this, the pH influences the effectiveness of pitch retention and removal of pitch. The results indicate that pitch problems could be diminished by acknowledging the importance of pH in various papermaking processes.