Composite artistry in the Book of Numbers : a study in biblical narrative conventions 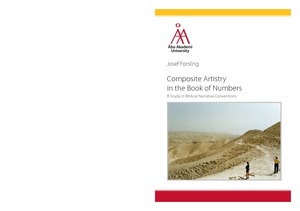 The present thesis discusses the coherence or lack of coherence in the book of Numbers, with special regard to its narrative features. The fragmented nature of Numbers is a well-known problem in research on the book, affecting how we approach and interpret it, but to date there has not been any thorough investigation of the narrative features of the work and how they might contribute to the coherence or the lack of coherence in the book. The discussion is pursued in light of narrative theory, and especially in connection to three parameters that are typically understood to be invoked in the interpretation of narratives: 1) a narrative paradigm, or ‘story,’ meaning events related to each other temporally, causally, and thematically, in a plot with a beginning, middle, and end; 2) discourse, being the expression plane of a narrative, or the devices that an author has at hand in constructing a narrative; 3) the situation or languagegame of the narrative, prototypical examples being factual reports, which seeks to depict a state of affairs, and storytelling narratives, driven by a demand for tellability. In view of these parameters the present thesis argues that it is reasonable to form four groups to describe the narrative material of Numbers: genuine narratives (e.g. Num 12), independent narrative sequences (e.g. Num 5:1-4), instrumental scenes and situations (e.g. Num 27:1-5), and narrative fragments (e.g. Num 18:1). These groups are mixed throughout with non-narrative materials.
Seen together, however, the narrative features of these groups can be understood to create an attenuated narrative sequence from beginning to end in Numbers, where one thing happens after another. This sequence, termed the ‘larger story’ of Numbers, concerns the wandering of Israel from Sinai to Moab. Furthermore, the larger story has a fragmented plot. The end-point is fixed on the promised land, Israel prepares for the wandering towards it (Num 1-10), rebels against wandering and the promise and is sent back into the wilderness (Num 13-14), returns again after forty years (Num 21ff.), and prepares for conquering the land (Num 22-36). Finally, themes of the promised land, generational succession, and obedience-disobedience, operate in this larger story. Purity is also a significant theme in the book, albeit not connected to plot in the larger story. All in all, sequence, plot, and theme in the larger story of Numbers can be understood to bring some coherence to the book. However, neither aspect entirely subsumes the whole book, and the four groups of narrative materials can also be understood to underscore the incoherence of the work in differentiating its variegated narrative contents. Numbers should therefore be described as an anthology of different materials that are loosely connected through its narrative features in the larger story, with the aim of informing Israelite identity by depicting a certain period in the early history of the people.