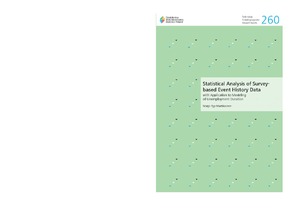 Longitudinal surveys are increasingly used to collect event history data on person-specific processes such as transitions between labour market states. Surveybased event history data pose a number of challenges for statistical analysis. These challenges include survey errors due to sampling, non-response, attrition and measurement.
This study deals with non-response, attrition and measurement errors in event history data and the bias caused by them in event history analysis. The study also discusses some choices faced by a researcher using longitudinal survey data for event history analysis and demonstrates their effects. These choices include, whether a design-based or a model-based approach is taken, which subset of data to use and, if a design-based approach is taken, which weights to use.
The study takes advantage of the possibility to use combined longitudinal survey register data. The Finnish subset of European Community Household Panel (FI ECHP) survey for waves 1–5 were linked at person-level with longitudinal register data. Unemployment spells were used as study variables of interest. Lastly, a simulation study was conducted in order to assess the statistical properties of the Inverse Probability of Censoring Weighting (IPCW) method in a survey data context.
The study shows how combined longitudinal survey register data can be used to analyse and compare the non-response and attrition processes, test the missingness mechanism type and estimate the size of bias due to non-response and attrition. In our empirical analysis, initial non-response turned out to be a more important source of bias than attrition. Reported unemployment spells were subject to seam effects, omissions, and, to a lesser extent, overreporting. The use of proxy interviews tended to cause spell omissions. An often-ignored phenomenon classification error in reported spell outcomes, was also found in the data. Neither the Missing At Random (MAR) assumption about non-response and attrition mechanisms, nor the classical assumptions about measurement errors, turned out to be valid. Both measurement errors in spell durations and spell outcomes were found to cause bias in estimates from event history models. Low measurement accuracy affected the estimates of baseline hazard most. The design-based estimates based on data from respondents to all waves of interest and weighted by the last wave weights displayed the largest bias. Using all the available data, including the spells by attriters until the time of attrition, helped to reduce attrition bias. Lastly, the simulation study showed that the IPCW correction to design weights reduces bias due to dependent censoring in design-based Kaplan-Meier and Cox proportional hazard model estimators.
The study discusses implications of the results for survey organisations collecting event history data, researchers using surveys for event history analysis, and researchers who develop methods to correct for non-sampling biases in event history data.