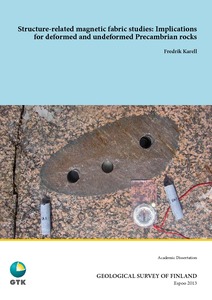 The aim of this thesis research was to gain a better understanding of the emplacement of rapakivi granite intrusions, as well as the emplacement of gold-bearing hydrothermal fluids in structurally controlled mineralizations. Based on investigations of the magnetic fabric, the internal structures could be analysed and the intrusion mechanisms for rapakivi granite intrusions and respectively different deformation stages within gold-bearing shear and fault zones identified.
Aeromagnetic images revealed circular structures within the rapakivi granite batholiths of Wiborg, Vehmaa and Åland. These circular structures represent intrusions that eventually build up these large batholiths. The rapakivi granite intrusions of Vehmaa, Ruotsinpyhtää within the Wiborg batholith and Saltvik intrusions within the Åland batholith all show bimodal magnetic susceptibilities with paramagnetic and ferromagnetic components. The distribution of the bimodality is related to different magma batches of the studied intrusions. The anisotropy of magnetic susceptibility (AMS) reveals internal structures that cannot be studied macroscopically or by microscope. The Ruotsinpyhtää and Vehmaa intrusions represent similar intrusion geometries, with gently to moderately outward dipping magnetic foliations. In the case of Vehmaa, the magnetic lineations are gently plunging and trend in the directions of the slightly elongated intrusion. The magnetic lineations represent magma flow. The shapes of the AMS ellipsoids are also more planar (oblate) in the central part of the intrusion, whereas they become more linear (prolate) near the margin. These AMS results, together with field observations, indicate that the main intrusion mechanism has involved the subsidence of older blocks with successive intrusion of fractionated magma during repeated cauldron subsidence. The Saltvik area within the Åland batholith consists of a number of smaller elliptical intrusions of different rapakivi types forming a multiple intrusive complex. The magnetic fabric shows a general westward dipping of the pyterlite and eastward dipping of the contiguous even-grained rapakivi granite, which indicates a central inflow of magma batches towards the east and west resulting from a laccolitic emplacement of magma batches, while the main mechanism for space creation was derived from subsidence.
The magnetic fabric of structurally controlled gold potential shear and fault zones in Jokisivu, Satulinmäki and Koijärvi was investigated in order to describe the internal structures and define the deformation history and emplacement of hydrothermal fluids. A further aim of the research was to combine AMS studies with palaeomagnetic methods to constrain the timing for the shearing event relative to the precipitation of ferromagnetic minerals and gold. All of the studied formations are dominated by monoclinic pyrrhotite. The AMS directions generally follow the tectonic structures within the formations. However, internal variations in the AMS direction as well as the shapes of the AMS ellipsoids are observed within the shear zones. In Jokisivu and Satulinmäki in particular, the magnetic signatures of the shear zone core differ from the margins. Furthermore, the shape of the magnetic fabric in the shear zone core of Jokisivu is dominated by oblate shapes, whereas the margins exhibit prolate shapes. These variations indicate a later effect of the hydrothermal fluids on the general shear event. The palaeo-magnetic results reveal a deflection from the original Svecofennian age geomagnetic direction. These results, coupled with correlations between the orientation of the NRM vectors and the magnetic and rock fabrics, imply that the gold-rich hydrothermal fluids were emplaced pre/syntectonically during the late stages of the Svecofennian orogeny.