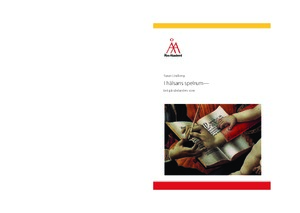 With caring science as its foundation and by means of the perioperative dialogue, the intended contribution and overall aim of this present thesis is to describe what play is and could be in the caring reality, an ideal model. The perioperative dialogue is the nurse anaesthetists’ pre-, intra- and post-operative dialogues with the children they care for in connection with anesthesia. The thesis is composed according to Schopenhauer’s notion that the road to science presupposes the world seen as performances, and has an all-pervading hermeneutic approach.
The performances of the thesis are: the performance of all performances, the empirical performance, the transcendental performance and the universal performance. The performance of all performances originates in the theoretical perspective of the thesis and describes what play and its characteristics are. This performance is realized through the hermeneutic interpretation of the etymology and original meaning of the word play along with texts from caring science, philosophy, anthropology and the history of religion. The empirical performance originates in four empirical studies where caring is organized as a perioperative dialogue. In study I, the material was collected with the help of participating observations and semi-structured interviews, in study II, with the help of the critical incident method and in study III, with the help of conversation interviews. In study IV, play develops into a clinical caring science research method. The research participants consist of children with special needs, children with a pronounced fear of anaesthesia, parents of children with severe autism and nurse anaesthetists. The empirical performance relates in what way play manifests in a perioperative child context by interpreting the results from the empiric in the light of the characteristics of play.
The transcendental performance is enacted in the playhouse of health and presents a picture of the essence of play, the playing. In the playhouse of health, the light, winged movement of play is actualized when what was previously too difficult, too heavy and pinioned instead is as easy as anything. The eye of love and compassion knows the art of deciphering the secret script where the Other’s holiness resides, even if mere glimpses of it appear.
The universal performance depicts three caring acts where the entrance consists of entering play, the ideal of which is realized in the unmasked openness face to face, that which protects the playing human being against encroachment and an unwanted audience. In the second caring act, entering play plays on to the finely-tuned interplay between human beings in the winged play of beauty and dignity. In the third caring act, the world’s deepest plays are staged on the stage of caring, in the sense that the innermost being of each individual, the universal will joins in and allows individuals to live as playing human beings who are at home with themselves and the world. The captivating, graceful and friendly play works from within itself, as long as it illumined by the light of claritas can play undisturbed on the stage of caring where it – like an unclouded mirror of its own ideal watches over children’s health.