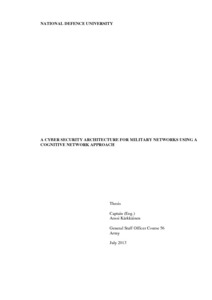 Cyber security is one of the main topics that are discussed around the world today. The threat is real, and it is unlikely to diminish. People, business, governments, and even armed forces are networked in a way or another. Thus, the cyber threat is also facing military networking. On the other hand, the concept of Network Centric Warfare sets high requirements for military tactical data communications and security. A challenging networking environment and cyber threats force us to consider new approaches to build security on the military communication systems.

The purpose of this thesis is to develop a cyber security architecture for military networks, and to evaluate the designed architecture. The architecture is described as a technical functionality. As a new approach, the thesis introduces Cognitive Networks (CN) which are a theoretical concept to build more intelligent, dynamic and even secure communication networks. The cognitive networks are capable of observe the networking environment, make decisions for optimal performance and adapt its system parameter according to the decisions. As a result, the thesis presents a five-layer cyber security architecture that consists of security elements controlled by a cognitive process. The proposed architecture includes the infrastructure, services and application layers that are managed and controlled by the cognitive and management layers. The architecture defines the tasks of the security elements at a functional level without introducing any new protocols or algorithms.

For evaluating two separated method were used. The first method is based on the SABSA framework that uses a layered approach to analyze overall security of an organization. The second method was a scenario based method in which a risk severity level is calculated. The evaluation results show that the proposed architecture fulfills the security requirements at least at a high level. However, the evaluation of the proposed architecture proved to be very challenging. Thus, the evaluation results must be considered very critically. The thesis proves the cognitive networks are a promising approach, and they provide lots of benefits when designing a cyber security architecture for the tactical military networks. However, many implementation problems exist, and several details must be considered and studied during the future work.