Hezbollah and Taliban - hybrid adversaries in contemporary conflicts? : views on an adversary from the United States Armed Forces perspective 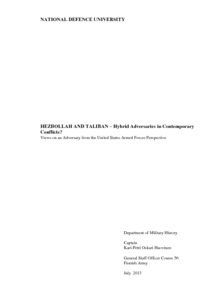 The experiences of the United States Armed Forces of the wars in Iraq and Afghanistan and Israel Defense Forces in the Second Lebanon War resulted a new term to surface called “hybrid warfare”. It was to describe the complexity of today’s battlefield. The term “hy-brid warfare” was never officially defined nor is it today. The updated version of the US ARMY Field Manual 3-0: Operations (Change 1) from February 22, 2011, introduced and defined “hybrid threat” and thus opened the discussion for hybrid adversary.

According to the model used in this thesis, it is concluded that Taliban does not meet the standards of a hybrid adversary, but with acquisition of standoff weapons it would quickly qualify as one. The model proved to work, and it could be used as a tool by intelligence of-ficers for estimating the threat levels of any group or identifying those groups that are al-ready or are about to develop into a hybrid adversary.