Stop bugging me! : diversity in appearance of warning coloration 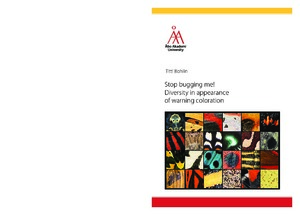 In nature, many animals use body coloration to communicate with each other. For example, colorations can be used as signals between individuals of the same species, but also to recognise individuals of other species, and if they may comprise a threat or not. Many animals use protective coloration to avoid predation. The two most common strategies of protective coloration are camouflage and aposematism. Camouflaged animals have coloration that minimises detection, usually by matching colours or structures in the background. Aposematic animals, on the other hand, signal to predators that they are defended. The defence can be physical structures, such as spikes and hairs, or chemical compounds that make the animal distasteful or even deadly toxic. In order for the warning signal to be effective, the predator has to recognise it as such. Studies have shown that birds for example, that are important visual predators on insects, learn to recognise and avoid unpalatable prey faster if they contrast the background or have large internal contrasts. Typical examples of aposematic species have conspicuous colours like yellow, orange or red, often in combination with black.
My thesis focuses on the appearance and function of aposematic colour patterns. Even though researchers have studied aposematism for over a century, there is still a lot we do not know about the phenomenon. For example, as it is crucial that the predators recognise a warning signal, aposematic colorations should assumingly evolve homogeneously and be selected for maximal conspicuousness. Instead, there is an extensive variation of colours and patterns among warning colorations, and it is not uncommon to find typical cryptic colours, such as green and brown in aposematic colour patterns. One hypothesis to this variation is that an aposematic coloration does not have to be maximally signalling in order to be effective, instead it is sufficient to have distinct features that can be easily distinguished from edible prey. To be maximally conspicuous is one way to achieve this, but not the only way. Another hypothesis is that aposematic prey that do not exhibit maximal conspicuousness can exploit both camouflage and aposematism in a distance-dependent fashion, by being signalling when seen close up but camouflaged at a distance. Many prey animals also make use of both strategies by shifting colour at different ecological conditions such as seasonal variations, fluctuations in food resources or between life stages. Yet another explanation for the variation may be that prey animals are usually exposed to several predator species that vary in visual perception and tolerance towards various toxins.
The aim with this thesis is, by studying their functions, to understand why aposematic warning signals vary in appearance, specifically in the level of conspicuousness, and if warning coloration can be combined with camouflage.
In paper I, I investigated if the colour pattern of the aposematic larva of the Apollo butterfly (Parnassius apollo) can switch function with viewing distance, and be signalling at close range but camouflaged at a distance, by comparing detection time between different colour variants and distances. The results show that the natural coloration has a dual distance-dependent function. Moreover, the study shows that an aposematic coloration does not have to be selected for maximal conspicuousness. A prey animal can optimise its coloration primarily by avoiding detection, but also by investing in a secondary defence, which presence can be signalled if detected.
In paper II, I studied how easily detected the coloration of the firebug (Pyrrhocoris apterus), a typical aposematic species, is at different distances against different natural backgrounds, by comparing detection time between different colour variants. Here, I found no distance-dependent switch in function. Instead, the results show that the coloration of the firebug is selected for maximal conspicuousness. One explanation for this is that the firebug is more mobile than the butterfly larva in study I, and movement is often incompatible with efficient camouflage.
In paper III, I investigated if a seasonal related colour change in the chemically defended striated shieldbug (Graphosoma lineatum) is an adaptation to optimise a protective coloration by shifting from camouflage to aposematism between two seasons. The results confirm the hypothesis that the coloration expressed in the late summer has a camouflage function, blending in with the background. Further, I investigated if the internal pattern as such increased the effectiveness of the camouflage. Again, the results are in accordance with the hypothesis, as the patterned coloration was more difficult to detect than colorations lacking an internal pattern. This study shows how an aposematic species can optimise its defence by shifting from camouflage to aposematism, but in a different fashion than studied in paper I.
The aim with study IV was to study the selection on aposematic signals by identifying characteristics that are common for colorations of aposematic species, and that distinguish them from colorations of other species. I compared contrast, pattern element size and colour proportion between a group of defended species and a group of undefended species. In contrast to my prediction, the results show no significant differences between the two groups in any of the analyses. One explanation for the non-significant results could be that there are no universal characteristics common for aposematic species. Instead, the selection pressures acting on defended species vary, and therefore affect their appearance differently. Another explanation is that all defended species may not have been selected for a conspicuous aposematic warning coloration.
Taken together, my thesis shows that having a conspicuous warning coloration is not the only way to be aposematic. Also, aposematism and camouflage is not two mutually exclusive opposites, as there are prey species that exploit both strategies. It is also important to understand that prey animals are exposed to various selection pressures and trade-offs that affect their appearance, and determines what an optimal coloration is for each species or environment. In conclusion, I hold that the variation among warning colorations is larger and coloration properties that have been considered as archetypically aposematic may not be as widespread and representative as previously assumed.