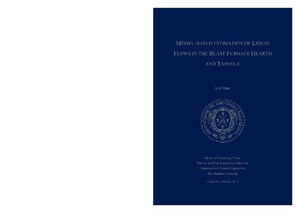 This thesis presents a set of methods and models for estimation of iron and slag flows in the blast furnace hearth and taphole. The main focus was put on predicting taphole flow patterns and estimating the effects of various taphole conditions on the drainage behavior of the blast furnace hearth. All models were based on a general understanding of the typical tap cycle of an industrial blast furnace. Some of the models were evaluated on short-term process data from the reference furnace. A computational fluid dynamics (CFD) model was built and applied to simulate the complicated hearth flows and thus to predict the regions of the hearth exerted to erosion under various operating conditions.
Key boundary variables of the CFD model were provided by a simplified drainage model based on the first principles. By examining the evolutions of liquid outflow rates measured from the furnace studied, the drainage model was improved to include the effects of taphole diameter and length. The estimated slag delays showed good agreement with the observed ones. The liquid flows in the taphole were further studied using two different models and the results of both models indicated that it is more likely that separated flow of iron and slag occurs in the taphole when the liquid outflow rates are comparable during tapping. The drainage process was simulated with an integrated model based on an overall balance analysis: The high in-furnace overpressure can compensate for the resistances induced by the liquid flows in the hearth and through the taphole.
Finally, a recently developed multiphase CFD model including interfacial forces between immiscible liquids was developed and both the actual iron-slag system and a water-oil system in laboratory scale were simulated. The model was demonstrated to be a useful tool for simulating hearth flows for gaining understanding of the complex phenomena in the drainage of the blast furnace.