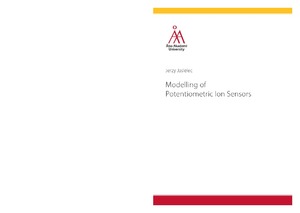 Potentiometric ion sensors are a very important subgroup of electrochemical sensors, very attractive for practical applications due to their small size, portability, low-energy consumption, relatively low cost and not changing the sample composition. They are investigated by the researchers from many fields of science. The continuous development of this field creates the necessity for a detailed description of sensor response and the electrochemical processes important in the practical applications of ion sensors.
The aim of this thesis is to present the existing models available for the description of potentiometric ion sensors as well as their applicability and limitations. This includes the description of the diffusion potential occurring at the reference electrodes. The wide range of existing models, from most idealised phase boundary models to most general models, including migration, is discussed. This work concentrates on the advanced modelling of ion sensors, namely the Nernst-Planck-Poisson (NPP) model, which is the most general of the presented models, therefore the most widely applicable. It allows the modelling of the transport processes occurring in ion sensors and generating the potentiometric response.
Details of the solution of the NPP model (including the numerical methods used) are shown. The comparisons between NPP and the more idealized models are presented. The applicability of the model to describe the formation of diffusion potential in reference electrode, the lower detection limit of both ion-exchanger and neutral carrier electrodes and the effect of the complexation in the membrane are discussed. The model was applied for the description of both types of electrodes, i.e. with the inner filling solution and solidcontact electrodes.
The NPP model allows the electrochemical methods other than potentiometry to be described. Application of this model in Electrochemical Impedance Spectroscopy is discussed and a possible use in chrono-potentiometry is indicated.
By combining the NPP model with evolutionary algorithms, namely Hierarchical Genetic Strategy (HGS), a novel method allowing the facilitation of the design of ion sensors was created. It is described in detail in this thesis and its possible applications in the field of ion sensors are indicated.
Finally, some interesting effects occurring in the ion sensors (i.e. overshot response and influence of anionic sites) as well as the possible applications of NPP in biochemistry are described.