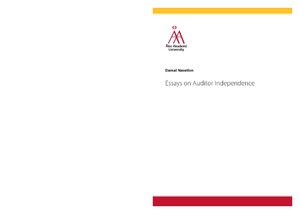 Nasution, Damai
Åbo Akademi University
This publication is copyrighted. You may download, display and print it for Your own personal use. Commercial use is prohibited.
Näytä kaikki kuvailutiedot

Auditor independence is a cornerstone of the auditing profession and the basic principle that underpins the reputation of the auditing profession in the public eye. Indeed, it is the attribute most demanded from auditors by the public. Therefore, the sustainability of the auditing profession depends on how auditors can protect this principle. This dissertation consists of four interrelated essays concerned with auditor independence. Specifically, it examines situations that can threaten and impair auditor independence. In addition, this dissertation also examines several variables that may enhance and protect auditor independence.
The first essay aims to examine the impact of social pressures occurring within audit firms on auditors’ judgment in the setting of a society with “high power distance” and “low individualism” cultural dimensions. The social pressures consisted of obedience pressure exerted by an auditor’s superior and conformity pressure exerted by an auditor’s colleague. Moreover, two moderating variables—a multi-dimensional professional commitment and locus of control—were included as moderator variables in the relationship between the social pressures faced by auditors and their judgment. The findings show that obedience and conformity pressures influence auditor judgment.
Auditors who face the social pressures will make a judgment that may be even diametrically opposite to the independence principle. The findings also indicate that a multi-dimensional professional commitment and locus of control may potentially influence auditor judgment in a situation with social pressures.
The second essay aims to investigate the association of advocacy and familiarity threats caused by auditor fee dependence and auditor tenure on auditor independence based on Finnish data, law, and auditing environment. This essay was motivated by the Green Paper on Audit Policy, published by the European Commission in 2010 that questions whether the maximum fee collected from a client should be regulated and whether consecutive assignments should be limited, among others. Contrary to popular belief, this essay does not find evidence that audit fees and long auditor tenure will jeopardise auditor independence. Therefore, the findings do not support policies to regulate auditor fees or limit auditor tenure in Finland.
The third essay aims to examine the effect of client intimidation on auditor independence in an audit-client conflict situation. Intimidation threat is one of five independence threats that are explicitly referenced in the IFAC’s independence framework. Client intimidation was manifested in the client threatening to replace the auditor if the auditor did not adopt the client’s position. In addition, this essay examines the role of auditor’s perceived pressure and multi-dimensions of professional commitment as moderator variables. The findings suggest that auditors who experience client intimidation in an audit conflict situation are more likely to have their independence impaired than those who are in a similar situation but without client intimidation. Moreover, auditors who experience client intimidation perceive higher pressure than those who do not experience intimidation. Finally, auditors’ affective and continuance professional commitment dimensions moderate the relationship between auditors’ perceived pressures and auditor independence.
The aim of the fourth essay is twofold. First, it aims to develop a scale for measuring auditors’ reputation awareness. Second, it aims to examine the correlation between the levels of auditor reputation awareness and auditor independence. A seven-item scale was developed as the reputation awareness scale. The findings indicate that the scale consists of one dimension. It also has a level of satisfactory reliability and a high level of validity. The findings show that there is a positive correlation between the level of auditors’ reputation awareness and auditor independence.