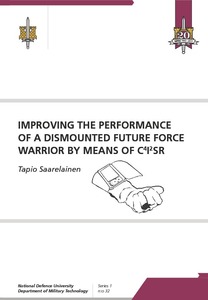 This thesis comprises seven peer-reviewed articles and examines systems and applications suitable for increasing Future Force Warrior performance, minimizing collateral damage, improving situational awareness and Common Operational Picture. Based on a literature study, missing functionalities of Future Force Warrior were identified and new ideas, concepts and solutions were created as part of early stages of Systems of Systems creation. These introduced ideas have not yet been implemented or tested in combat and for this reason benefit analyses are excluded.

The main results of this thesis include the following:

A new networking concept, Wireless Polling Sensor Network, which is a swarm of a few Unmanned Aerial Vehicles forming an ad-hoc network and polling a large number of fixed sensor nodes. The system is more robust in a military environment than traditional Wireless Sensor Networks.

Other results of the thesis include an investigation of the use of Free Space Optics in tactical communications, a proposal for tracking neutral forces, a system for upgrading simple collaboration tools for command, control and collaboration purposes, a three-level hierarchy of Future Force Warrior, and methods for reducing incidents of fratricide.