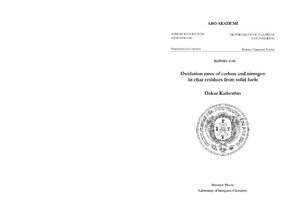 Computational fluid dynamics (CFD) modeling is an important tool in designing new combustion systems. By using CFD modeling, entire combustion systems can be modeled and the emissions and the performance can be predicted. CFD modeling can also be used to develop new and better combustion systems from an economical and environmental point of view. In CFD modeling of solid fuel combustion, the combustible fuel is generally treated as single fuel particles. One of the limitations with the CFD modeling concerns the sub-models describing the combustion of single fuel particles. Available models in the scientific literature are in many cases not suitable as submodels for CFD modeling since they depend on a large number of input parameters and are computationally heavy.
In this thesis CFD-applicable models are developed for the combustion of single fuel particles. The single particle models can be used to improve the combustion performance in various combustion devices or develop completely new technologies. The investigated fields are oxidation of carbon (C) and nitrogen (N) in char residues from solid fuels.
Modeled char-C oxidation rates are compared to experimental oxidation rates for a large number of pulverized solid fuel chars under relevant combustion conditions. The experiments have been performed in an isothermal plug flow reactor operating at 1123-1673 K and 3-15 vol.% O2. In the single particle model, the char oxidation is based on apparent kinetics and depends on three fuel specific parameters: apparent pre-exponential factor, apparent activation energy, and apparent reaction order. The single particle model can be incorporated as a sub-model into a CFD code. The results show that the modeled char oxidation rates are in good agreement with experimental char oxidation rates up to around 70% of burnout. Moreover, the results show that the activation energy and the reaction order can be assumed to be constant for a large number of bituminous coal chars under conditions limited by the combined effects of chemical kinetics and pore diffusion. Based on this, a new model based on only one fuel specific parameter is developed (Paper III). The results also show that reaction orders of bituminous coal chars and anthracite chars differ under similar conditions (Paper I and Paper II); reaction orders of bituminous coal chars were found to be one, while reaction orders of anthracite chars were determined to be zero.
This difference in reaction orders has not previously been observed in the literature and should be considered in future char oxidation models. One of the most frequently used comprehensive char oxidation models could not explain the difference in the reaction orders. In the thesis (Paper II), a modification to the model is suggested in order to explain the difference in reaction orders between anthracite chars and bituminous coal chars.
Two single particle models are also developed for the NO formation and reduction during the oxidation of single biomass char particles. In the models the char-N is assumed to be oxidized to NO and the NO is partly reduced inside the particle. The first model (Paper IV) is based on the concentration gradients of NO inside and outside the particle and the second model is simplified to such an extent that it is based on apparent kinetics and can be incorporated as a sub-model into a CFD code (Paper V). Modeled NO release rates from both models were in good agreement with experimental measurements from a single particle reactor of quartz glass operating at 1173-1323 K and 3-19 vol.% O2. In the future, the models can be used to reduce NO emissions in new combustion systems.