Training executive functions in the laboratory and in real life : cognitive consequences of computer-based exercises and bilingualism 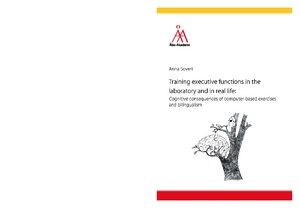 The question of the trainability of executive functions and the impact of such training on related cognitive skills has stirred considerable research interest. Despite a number of studies investigating this, the question has not yet been solved.
The general aim of this thesis was to investigate two very different types of training of executive functions: laboratory-based computerized training (Studies I-III) and realworld training through bilingualism (Studies IV-V). Bilingualism as a kind of training of executive functions is based on the idea that managing two languages requires executive resources, and previous studies have suggested a bilingual advantage in executive functions. Three executive functions were studied in the present thesis: updating of working memory (WM) contents, inhibition of irrelevant information, and shifting between tasks and mental sets.
Studies I-III investigated the effects of computer-based training of WM updating (Study I), inhibition (Study II), and set shifting (Study III) in healthy young adults. All studies showed increased performance on the trained task. More importantly, improvement on an untrained task tapping the trained executive function (near transfer) was seen in Study I and II. None of the three studies showed improvement on untrained tasks tapping some other cognitive function (far transfer) as a result of training. Study I also used PET to investigate the effects of WM updating training on a neurotransmitter closely linked to WM, namely dopamine. The PET results revealed increased striatal dopamine release during WM updating performance as a result of training.
Study IV investigated the ability to inhibit task-irrelevant stimuli in bilinguals and monolinguals by using a dichotic listening task. The results showed that the bilinguals exceeded the monolinguals in inhibiting task-irrelevant information. Study V introduced a new, complementary research approach to study the bilingual executive advantage and its underlying mechanisms. To circumvent the methodological problems related to natural groups design, this approach focuses only on bilinguals and examines whether individual differences in bilingual behavior correlate with executive task performances. Using measures that tap the three above-entioned executive functions, the results suggested that more frequent language switching was associated with better set shifting skills, and earlier acquisition of the second language was related to better inhibition skills.
In conclusion, the present behavioral results showed that computer-based training of executive functions can improve performance on the trained task and on closely related tasks, but does not yield a more general improvement of cognitive skills. Moreover, the functional neuroimaging results reveal that WM training modulates striatal dopaminergic function, speaking for training-induced neural plasticity in this important neurotransmitter system. With regard to bilingualism, the results provide further support to the idea that bilingualism can enhance executive functions. In addition, the new complementary research approach proposed here provides some clues as to which aspects of everyday bilingual behavior may be related to the advantage in executive functions in bilingual individuals.