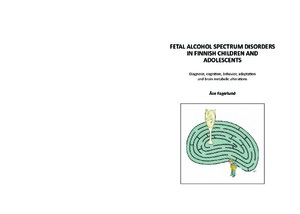 Fagerlund, Åse
Åbo Akademi University
This publication is copyrighted. You may download, display and print it for Your own personal use. Commercial use is prohibited.
Näytä kaikki kuvailutiedot

Alcohol consumption during pregnancy can potentially affect the developing fetus in devastating ways, leading to a range of physical, neurological, and behavioral alterations most accurately termed Fetal Alcohol Spectrum Disorders (FASD). Despite the fact that it is a preventable disorder, prenatal alcohol exposure today constitutes a leading cause of intellectual disability in the Western world. In Western countries where prevalence studies have been performed the rates of FASD exceed, for example, autism spectrum disorders, Down’s syndrome and cerebral palsy. In addition to the direct effects of alcohol, children and adolescents with FASD are often exposed to a double burden in life, as their neurological sequelae are accompanied by adverse living surroundings exposing them to further environmental risk. However, children with FASD today remain remarkably underdiagnosed by the health care system.
This thesis forms part of a larger multinational research project, The Collaborative Initiative on Fetal Alcohol Spectrum Disorders (the CIFASD), initiated by the National Institute of Alcohol Abuse and Alcoholism (NIAAA) in the U.S.A. The general aim of the present thesis was to examine a cohort of children and adolescents growing up with fetal alcohol-related damage in Finland. The thesis consists of five studies with a broad focus on diagnosis, cognition, behavior, adaptation and brain metabolic alterations in children and adolescents with FASD.
The participants consisted of four different groups: one group with histories of prenatal exposure to alcohol, the FASD group; one IQ matched contrast group mostly consisting of children with specific learning disorder (SLD); and two typically-developing control groups (CON1 and CON2). Participants were identified through medical records, random sampling from the Finnish national population registry and email alerts to students.
Importantly, the participants in the present studies comprise a group of very carefully clinically characterized children with FASD as the studies were performed in close collaboration with leading experts in the field (Prof. Edward Riley and Prof. Sarah Mattson, Center for Behavioral Teratology, San Diego State University, U.S.A; Prof. Eugene Hoyme, Sanford School of Medicine, University of South Dakota, U.S.A.). In the present thesis, the revised Institute of Medicine diagnostic criteria for FASD were tested on a Finnish population and found to be a reliable tool for differentiating among the subgroups of FASD. A weighted dysmorphology scoring system proved to be a valuable additional adjunct in quantification of growth deficits and dysmorphic features in children with FASD (Study 1).
The purpose of Study 2 was to clarify the relationship between alcohol-related dysmorphic features and general cognitive capacity. Results showed a significant correlation between dysmorphic features and cognitive capacity, suggesting that children with more severe growth deficiency and dysmorphic features have more cognitive limitations. This association was, however, only moderate, indicating that physical markers and cognitive capacity not always go hand in hand in individuals with FASD. Behavioral problems in the FASD group proved substantial compared to the typically developing control group. In Study 3 risk and protective factors associated with behavioral problems in the FASD group were explored further focusing on diagnostic and environmental factors. Two groups with elevated risks for behavioral problems emerged: length of time spent in residential care and a low dysmorphology score proved to be the most pervasive risk factor for behavioral problems. The results underscore the clinical importance of appropriate services and care for less visibly alcohol affected children and highlight the need to attend to children with FASD being raised in institutions. With their background of early biological and psychological impairment compounded with less opportunity for a close and continuous caregiver relationship, such children seem to run an especially great risk of adverse life outcomes.
Study 4 focused on adaptive abilities such as communication, daily living skills and social skills, in other words skills that are important for gradually enabling an independent life, maintain social relationships and allow the individual to become integrated into society. The results showed that adaptive abilities of children and adolescents growing up with FASD were significantly compromised compared to both typically-developing peers and IQ-matched children with SLD. Clearly different adaptive profiles were revealed where the FASD group performed worse than the SLD group, who in turn performed worse than the CON1 group. Importantly, the SLD group outperformed the FASD group on adaptive behavior in spite of comparable cognitive levels. This is the first study to compare adaptive abilities in a group of children and adolescents with FASD relative to both a contrast group of IQ-matched children with SLD and to a group of typically-developing peers.
Finally, in Study 5, through magnetic resonance spectroscopic imaging (MRS) evidence of longstanding neurochemical alterations were observed in adolescents and young adults with FASD related to alcohol exposure in utero 14-20 years earlier. Neurochemical alterations were seen in several brain areas: in frontal and parietal cortices, corpus callosum, thalamus and frontal white matter areas as well as in the cerebellar dentate nucleus. The findings are compatible with neuropsychological findings in FASD. Glial cells seemed to be more affected than neurons.
In conclusion, more societal efforts and resources should be focused on recognizing and diagnosing FASD, and supporting subgroups with elevated risk of poor outcome. Without adequate intervention children and adolescents with FASD run a great risk of marginalization and social maladjustment, costly not only to society but also to the lives of the many young people with FASD.