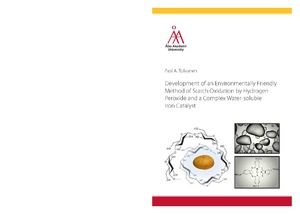 Tolvanen, Pasi
Åbo Akademi University
This publication is copyrighted. You may download, display and print it for Your own personal use. Commercial use is prohibited.
Näytä kaikki kuvailutiedot
Julkaisun pysyvä osoite on
http://urn.fi/URN:NBN:fi-fe202002135417

Oxidized starch is a key component in the paper industry, where it is used as both surfacing sizer and filler. Large quantities are annually used for this purpose; however, the methods for the oxidation are not environmentally friendly. In our research, we have studied the possibility to replace the harmful oxidation agents, such as hypochlorite or iodates and transition metal catalysts, with a more environmentally friendly oxidant, hydrogen peroxide (H2O2), and a special metal complex catalyst (FePcS), of which only a small amount is needed. The work comprised batch and semi-batch studies by H2O2, ultrasound studies of starch particles, determination of low-molecular by-products and determination of the decomposition kinetics of H2O2 in the presence of starch and the catalyst. This resulted in a waste-free oxidation method, which only produces water and oxygen as side products.
The starch oxidation was studied in both semi-batch and batch modes in respective to the oxidant (H2O2) addition. The semi-batch mode proved to yield a sufficient degree of substitution (COOH groups) for industrial purposes. Treatment of starch granules by ultrasound was found to improve the reactivity of starch. The kinetic results were found out to have a rather complex pattern – several oxidation phases were observed, apparently due to the fact that the oxidation reaction in the beginning only took place on the surface, whereas after a prolonged reaction time, partial degradation of the solid starch granules allowed further reaction in the interior parts. Batch-mode experiments enabled a more detailed study of the mechanisms of starch in the presence of H2O2 and the catalyst, but yielded less oxidized starch due to rapid decomposition of H2O2 due to its high concentrations. The effect of the solid-liquid (S/L) ratio in the reaction system was studied in batch experiments. These studies revealed that the presence of the catalyst and the starch enhance the H2O2 decomposition.