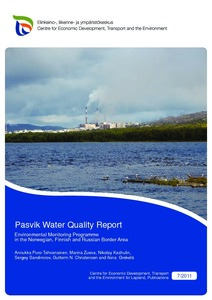 The Pasvik monitoring programme was created in 2006 as a result of the trilateral cooperation, and with the intention of following changes in the environment under variable pollution levels. Water quality is one of the basic elements of the Programme when assessing the effects of the emissions from the Pechenganikel mining and metallurgical industry (Kola GMK).


The Metallurgic Production Renovation Programme was implemented by OJSC Kola GMK to reduce emissions of sulphur and heavy metal concentrated dust. However, the expectations for the reduction in emissions from the smelter in the settlement Nikel were not realized. Nevertheless, Kola GMK has found that the modernization programme’s measures do not provide the planned reductions of sulfur dioxide emissions.


In this report, temporal trends in water chemistry during 2000–2009 are examined on the basis of the data gathered from Lake Inari, River Pasvik and directly connected lakes, as well as from 26 small lakes in three areas: Pechenganikel (Russia), Jarfjord (Norway) and Vätsäri (Finland). The lower parts of the Pasvik watercourse are impacted by both atmospheric pollution and direct wastewater discharge from the Pechenganikel smelter and the settlement of Nikel. The upper section of the watercourse, and the small lakes and streams which are not directly linked to the Pasvik watercourse, only receive atmospheric pollution.


The data obtained confirms the ongoing pollution of the river and water system. Copper (Cu), nickel (Ni) and sulphates are the main pollution components. The highest levels were observed close to the smelters. The most polluted water source of the basin is the River Kolosjoki, as it directly receives the sewage discharge from the smelters and the stream connecting the Lakes Salmijarvi and Kuetsjarvi. The concentrations of metals and sulphates in the River Pasvik are higher downstream from the Kuetsjarvi Lake. There has been no fall in the concentrations of pollutants in Pasvik watercourse over the last 10 years.


Ongoing recovery from acidification has been evident in the small lakes of the Jarfjord and Vätsäri areas during the 2000s. The buffering capacity of these lakes has improved and the pH has increased. The reason for this recovery is that sulphate deposition has decreased, which is also evident in the water quality. However, concentrations of some metals, especially Ni and Cu, have risen during the 2000s. Ni concentrations have increased in all three areas, and Cu concentrations in the Pechenganickel and Jarfjord areas, which are located closer to the smelters. Emission levels of Ni and Cu did not fall during 2000s. In fact, the emission levels of Ni compounds even increased compared to the 1990s.