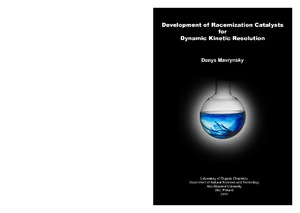 Preparation of optically active compounds is of high importance in modern medicinal
chemistry. Despite recent advances in the field of asymmetric synthesis, resolution of racemates
still remains the most utilized way for preparation of single enantiomers in industrial scale due to
its cost-efficiency and simplicity. Enzymatic kinetic resolution (KR) of racemates is a classical
method for separation of enantiomers. One of its drawbacks is the limitation of target enantiomer
yield to 50%. Dynamic Kinetic Resolution (DKR) allows to reach yields up to 100% by in situ
racemization of the less reactive enantiomer.
In the first part of this thesis, a number of half-sandwich ruthenium complexes were
prepared and evaluated as catalysts for racemization of optically active secondary alcohols. A
leading catalyst, Bn5CpRu(CO)2Cl, was identified. The catalyst discovered was extensively
characterized by its application for DKR of a broad range of secondary alcohols in a wide range
of reaction loadings (1 mmol – 1 mol). Cost-efficient chromatography-free procedure for
preparation of this catalyst was developed.
Further, detailed kinetic and mechanistic studies of the racemization reactions were
performed. Comparison of racemization rates in the presence of Bn5CpRu(CO)2Cl and
Ph5CpRu(CO)2Cl catalysts reveals that the performance of the catalytic system can be adjusted
by matching of the electronic properties of the catalysts and the substrates. Moreover,
dependence of the rate-limiting step from the electronic properties of the reagents was observed.
Important conclusions about reaction mechanism were made.
Finally, an alternative approach to DKR of amines based on space separated vessels was
addressed. This procedure allows the combination of thermolabile enzyme with racemization
catalysts active only at high temperatures.