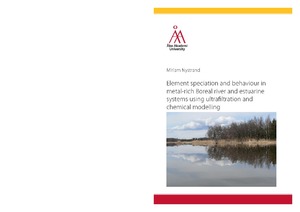 The bioavailability of metals and their potential for environmental pollution
depends not simply on total concentrations, but is to a great extent determined
by their chemical form. Consequently, knowledge of aqueous metal species is
essential in investigating potential metal toxicity and mobility. The overall aim
of this thesis is, thus, to determine the species of major and trace elements and
the size distribution among the different forms (e.g. ions, molecules and mineral
particles) in selected metal-enriched Boreal river and estuarine systems by
utilising filtration techniques and geochemical modelling. On the basis of the
spatial physicochemical patterns found, the fractionation and complexation
processes of elements (mainly related to input of humic matter and pH-change)
were examined. Dissolved (<1 kDa), colloidal (1 kDa-0.45 μm) and particulate
(>0.45 μm) size fractions of sulfate, organic carbon (OC) and 44
metals/metalloids were investigated in the extremely acidic Vörå River system
and its estuary in W Finland, and in four river systems in SW Finland
(Sirppujoki, Laajoki, Mynäjoki and Paimionjoki), largely affected by soil
erosion and acid sulfate (AS) soils. In addition, geochemical modelling was used
to predict the formation of free ions and complexes in these investigated waters.
One of the most important findings of this study is that the very large amounts of
metals known to be released from AS soils (including Al, Ca, Cd, Co, Cu, Mg,
Mn, Na, Ni, Si, U and the lanthanoids) occur and can prevail mainly in toxic
forms throughout acidic river systems; as free ions and/or sulfate-complexes.
This has serious effects on the biota and especially dissolved Al is expected to
have acute effects on fish and other organisms, but also other potentially toxic
dissolved elements (e.g. Cd, Cu, Mn and Ni) can have fatal effects on the biota
in these environments. In upstream areas that are generally relatively forested
(higher pH and contents of OC) fewer bioavailable elements (including Al, Cu,
Ni and U) may be found due to complexation with the more abundantly
occurring colloidal OC. In the rivers in SW Finland total metal concentrations
were relatively high, but most of the elements occurred largely in a colloidal or
particulate form and even elements expected to be very soluble (Ca, K, Mg, Na
and Sr) occurred to a large extent in colloidal form. According to geochemical
modelling, these patterns may only to a limited extent be explained by in-stream
metal complexation/adsorption. Instead there were strong indications that the
high metal concentrations and dominant solid fractions were largely caused by
erosion of metal bearing phyllosilicates. A strong influence of AS soils, known
to exist in the catchment, could be clearly distinguished in the Sirppujoki River
as it had very high concentrations of a metal sequence typical of AS soils in a
dissolved form (Ba, Br, Ca, Cd, Co, K, Mg, Mn, Na, Ni, Rb and Sr). In the
Paimionjoki River, metal concentrations (including Ba, Cs, Fe, Hf, Pb, Rb, Si,
Th, Ti, Tl and V; not typical of AS soils in the area) were high, but it was found
that the main cause of this was erosion of metal bearing phyllosilicates and thus
these metals occurred dominantly in less toxic colloidal and particulate fractions.
In the two nearby rivers (Laajoki and Mynäjoki) there was influence of AS soils,
but it was largely masked by eroded phyllosilicates. Consequently, rivers
draining clay plains sensitive to erosion, like those in SW Finland, have
generally high background metal concentrations due to erosion. Thus, relying on
only semi-dissolved (<0.45 μm) concentrations obtained in routine monitoring,
or geochemical modelling based on such data, can lead to a great overestimation
of the water toxicity in this environment.
The potentially toxic elements that are of concern in AS soil areas will
ultimately be precipitated in the recipient estuary or sea, where the acidic metalrich
river water will gradually be diluted/neutralised with brackish seawater.
Along such a rising pH gradient Al, Cu and U will precipitate first together with
organic matter closest to the river mouth. Manganese is relatively persistent in
solution and, thus, precipitates further down the estuary as Mn oxides together
with elements such as Ba, Cd, Co, Cu and Ni. Iron oxides, on the contrary, are
not important scavengers of metals in the estuary, they are predicted to be
associated only with As and PO4.