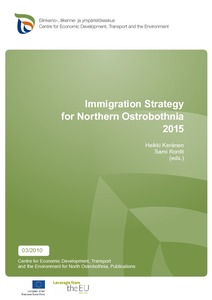 A strategy process was completed in the ESF project “Promotion of Work-related Immigration”, which was implemented at Centre for Economic Development, Transport and the Environment for North Ostrobothnia, and an immigration strategy was drawn up for Northern Ostrobothnia on the basis of the process. Information was collected about the situation in Northern Ostrobothnia from the point of view of immigration and the future availability of labour. The intention was to use the information as background material for the strategy. Employers’ need for support in recruiting foreign labour was investigated with a broad inquiry, to which
1000 respondents replied. The strategy process was carried out together with an outside consultant (Net Effect Oy) by arranging three workshops and a seminar where the workshop results were summarised. A large number of companies, authorities, municipalities, associations, project actors and immigrants engaged in immigration issues participated in the workshops. The draft strategy is based on their experiences about immigration and on statistical data, background inquiries and surveys. To ensure the accuracy of the draft strategy, comments were requested from several parties and received from 64 organisations.

The core of the immigration strategy consists of an initial analysis, values, a vision and priorities. The strategy is composed of three priorities. The key aim of the priority Internationalisation and Supporting Diversity is to support diversity in schools, workplaces and people’s everyday lives e.g. through attitude development and by promoting internationalisation in companies and education institutions. The aim of the priority Supporting Entrepreneurship and Recruiting Foreign Labour is to promote entrepreneurship among immigrants and the recruitment of foreign labour and to develop the forecasting of educational needs. The priority Developing Integration Services, Regional Cooperation and Networks, in turn, seeks to develop the service structure and policies of immigrant integration and to increase cooperation and exchange of information between regional actors engaged in integration issues.